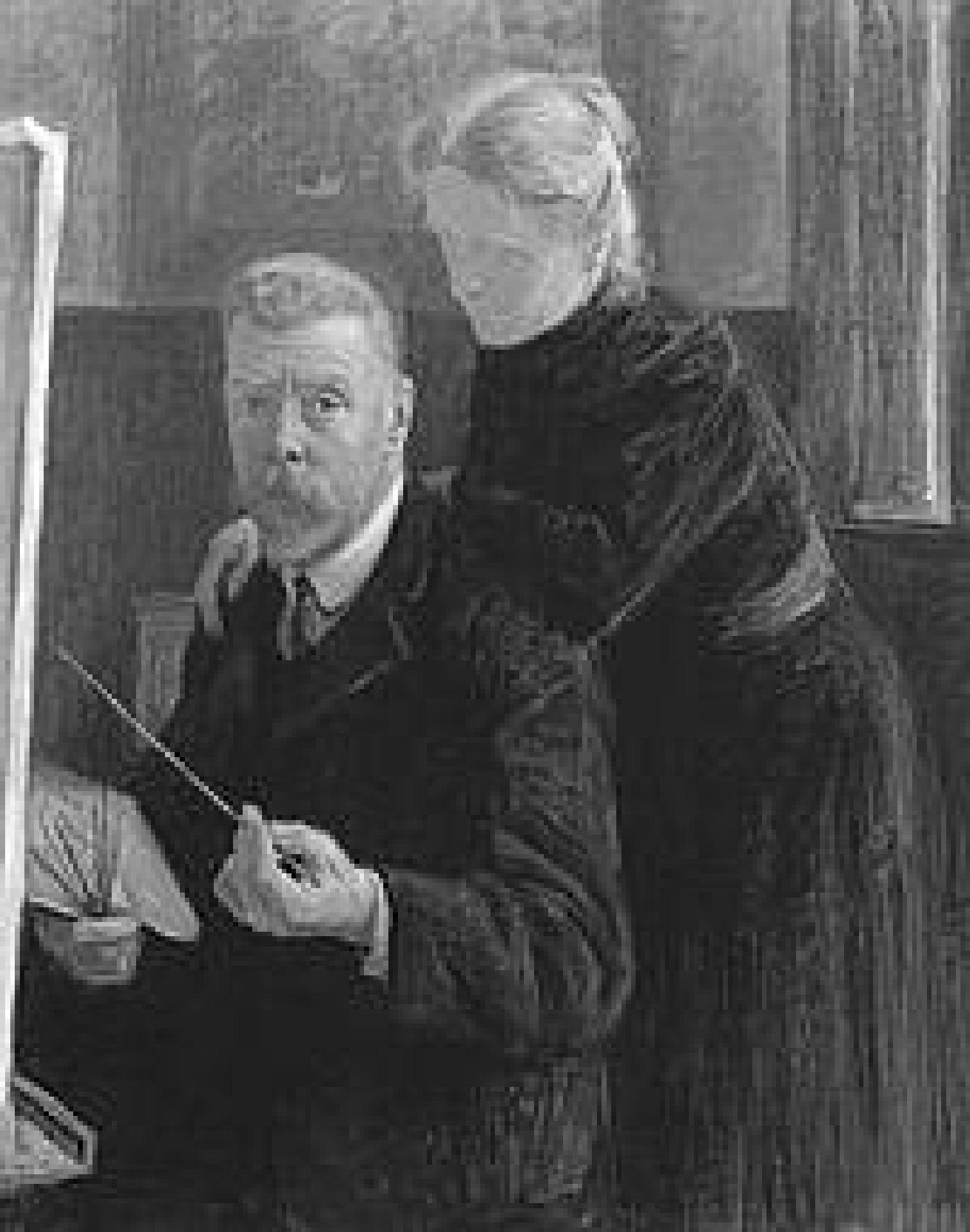 The painting career of Ferdinand Hart Nibbrig (1866-1915) conventionally began with a study at the Amsterdam State Academy. During a subsequent stay in Paris (1888-1889), he became acquainted with the neo-impressionism of Lucien and Camille Pissarro, which made a great impression on him. They painted with a technique in which unmixed colors were applied in dots (pointilles) and dashes , in order to best capture the glare of the light. Hart Nibbrig began to apply this technique himself from 1895, but without the strict color regulations that pointillism in France was subject to. He chose a very fine pointille for this purpose, then again a somewhat looser technique of paint strokes, combined with color sweeps and contour lines.
Born in Amsterdam, Hart Nibbrig received painting and drawing lessons from Johan Rust at a young age in that city. From 1881 to 1888 he studied at the Quellinusschool and the Rijks Academie. He then moves to Paris, where he meets Theo van Gogh, Vincent's younger brother, who works for the Boussod & Valadon firm. There he also came into contact with the revolutionary painters of the time, Claude Monet, Camille Pisarro, Georges Seurat and Vincent van Gogh. They break with conventional painting traditions and work with bright colours in other techniques. Back in the Netherlands, Hart Nibbrig processes the experiences gained. He lives and works in Hilversum for a while, then in the former studio of Jozef Israels in Amsterdam. There he painted for some time in the Amsterdam Impressionist style of that time, with rather dark colours.
Until 1894 he is looking for his own style. He experiments with different techniques for applying paint. When he cycled past the bulb fields near Bennebroek and Hillegom in the spring of 1892, he knew what he had to do. This feast of colour completely changes his palette and inspires him to his first impressionistic works. After a visit to the exhibition of the Belgian luminist movement Les Vingt in The Hague and his move to Laren in 1894, his style changed and he became one of the first Dutch artists to use the pointillist technique. A technique in which unmixed colors are applied in dots and stripes, in order to best capture the glare of the light.
Thanks to his marriage in 1895 to Johanna Moltzer, family of the owners of the Heirs Lucas Bols, Hart Nibbrig can have a house built in Laren. In this environment he finds the inspiration for his work; its lush garden, the view over the summer fields and buckwheat fields, the roads in the Eng, old people sitting in front of their house or working in the garden. Occasionally he makes a trip, to the Eiffel or South Limburg. In his own country he discovered the tranquility of Vlieland and in 1910 the Zeeuwse Zoutelande on the island of Walcheren. There he and his family spend the summers in a holiday home. He exhibits in the nearby seaside resort of Domburg and is a member of the exhibition committee. In Domburg, a group of painters forms, inspired by the special Zeeland light along the coast and its reflection on the flat land. Jan Toorop is their foreman and in addition to Hart Nibbrig, Piet Mondrian, Mies Elout Drabbe and Jacoba van Heemskerck, among others, are part of the group. At that time, Hart Nibbrig mainly painted landscapes, seascapes and portraits of the local population with an emphasis on the sea, the sun and the light. In 1907 the family moves from Laren to Rhenen because Hart Nibbrig is annoyed by the many villas being built in Laren.
During his life, Hart Nibbrig suffered from prejudice. He was considered by some to be a follower of the 'new French style', others thought he was not yet consistent enough in abandoning the relaxed academic style. It was not until later in life that Hart Nibbrig returned to the flat region of the past, especially in his portraits. But he became best known for his pointillé, in which he is quite unique for Holland, because next to Jan Toorop, Co Breman and Johan Briedé, few well-known Dutch painters have ventured into this. In 1915 the painter dies, less than fifty years old.
© Simonis & Buunk 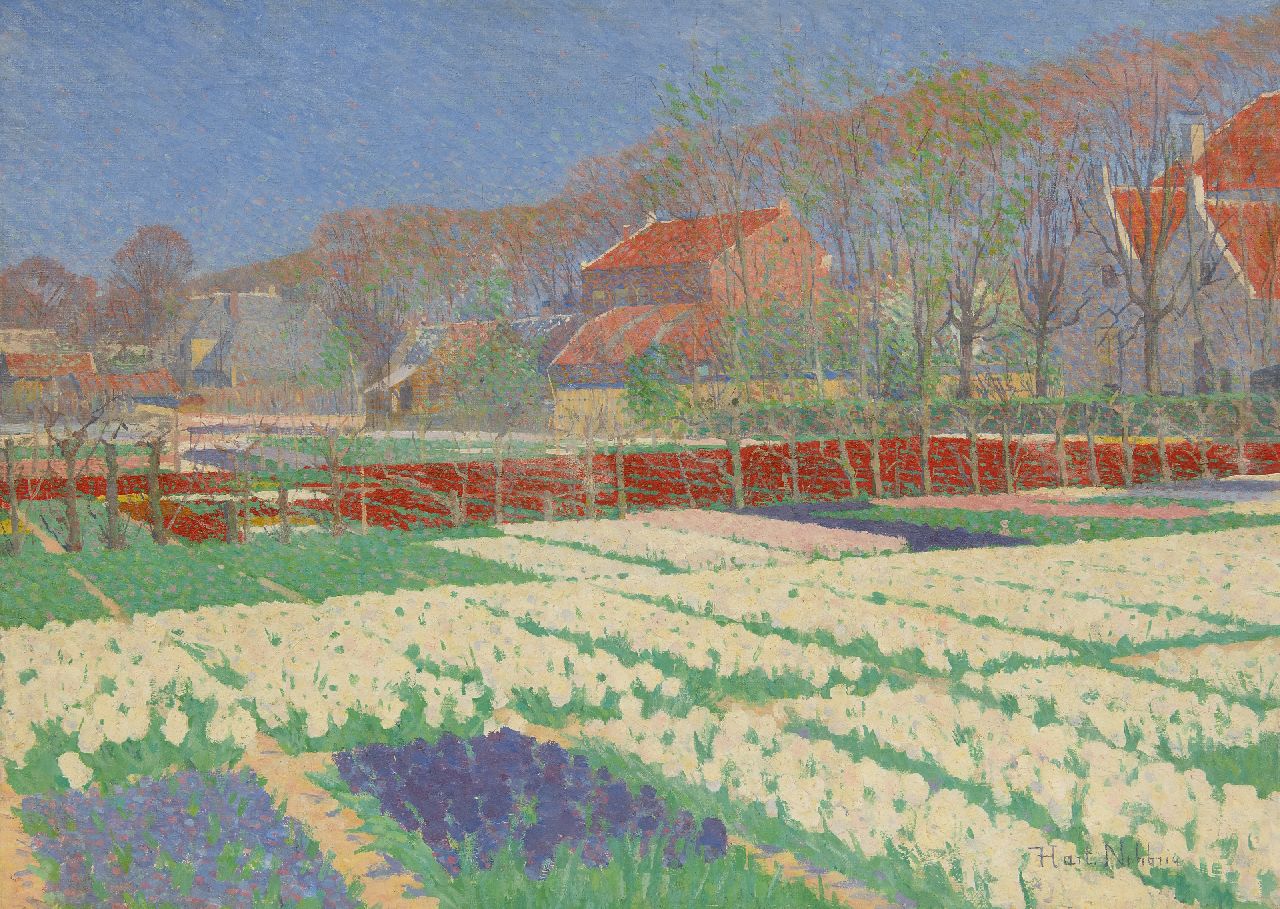 previously for salepaintings, watercolours and drawings by Ferdinand Hart Nibbrig 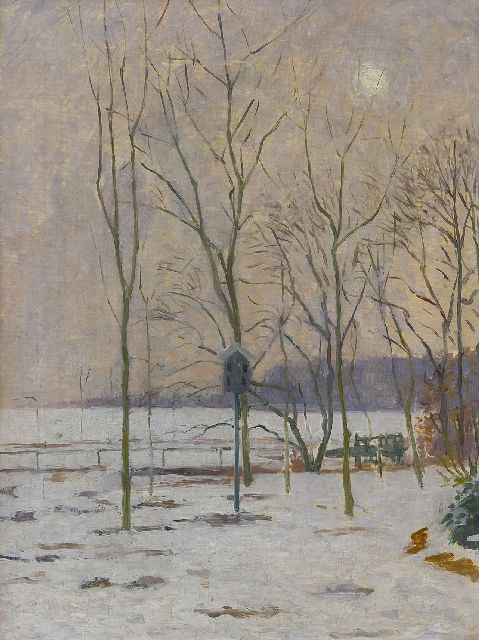 View of a s nowy garden with a bird's house

Landscape in the Eifel 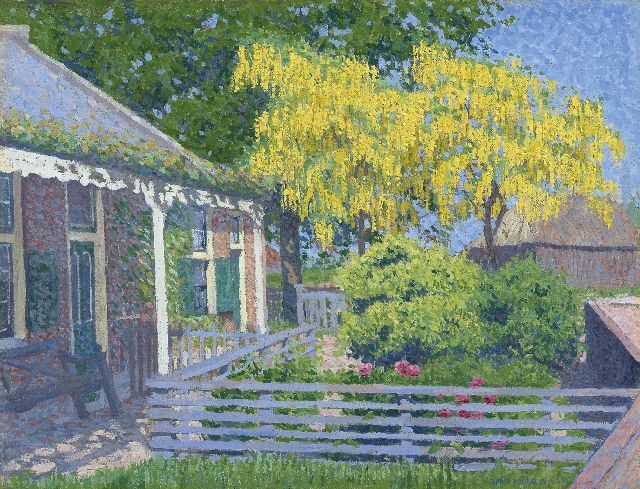 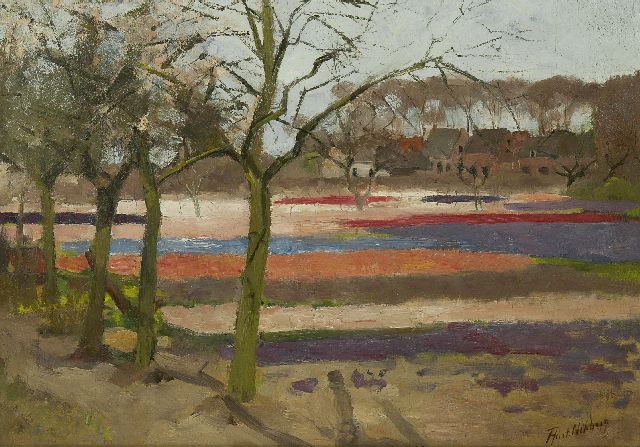 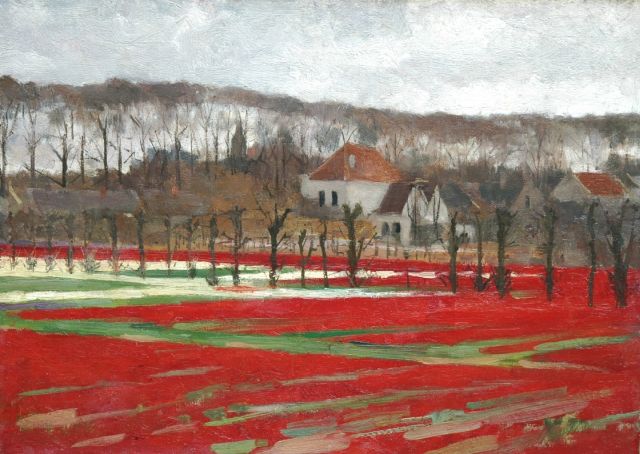 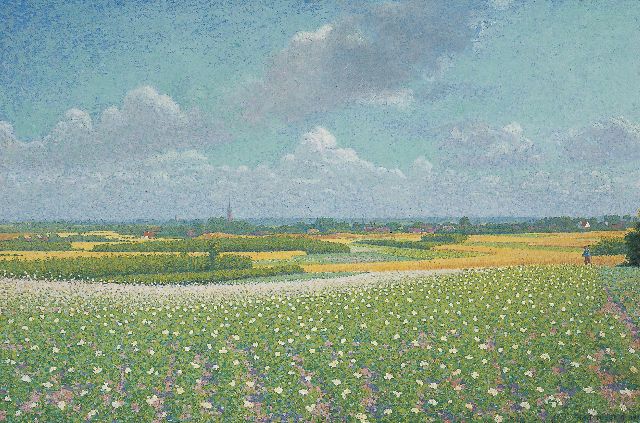 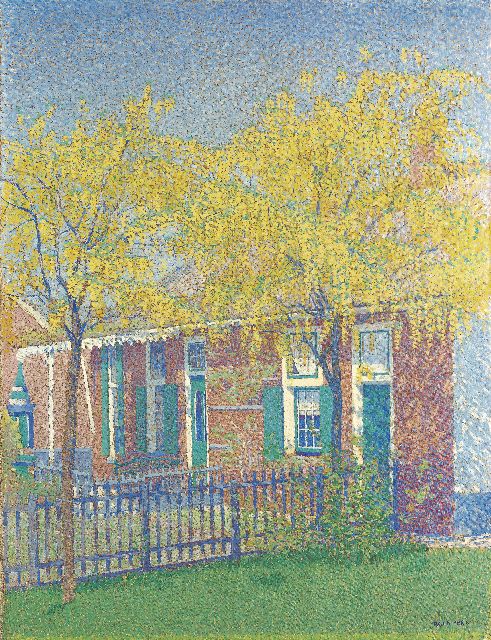 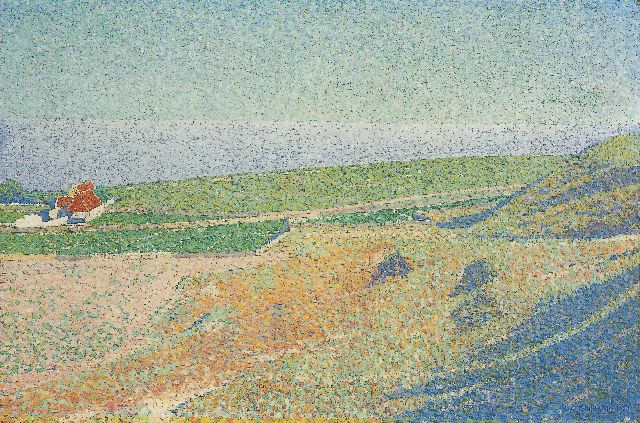 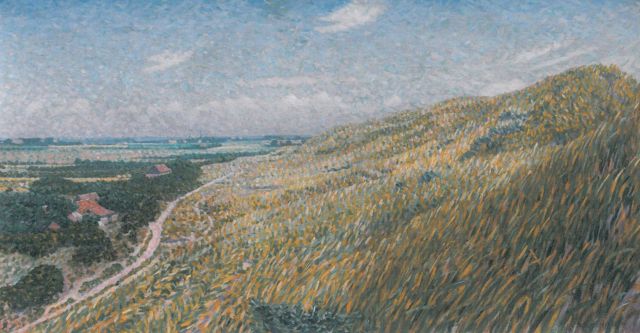 A View of Zoutelande 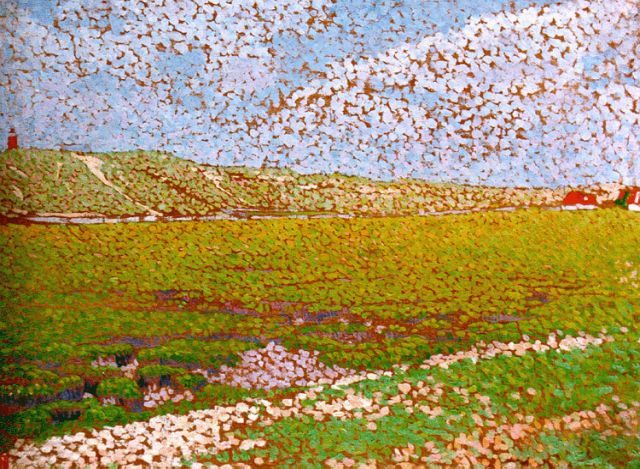 A view of Vlieland 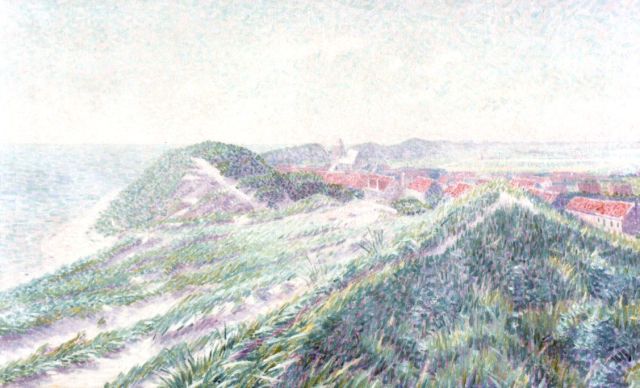 A view of Zoutelande 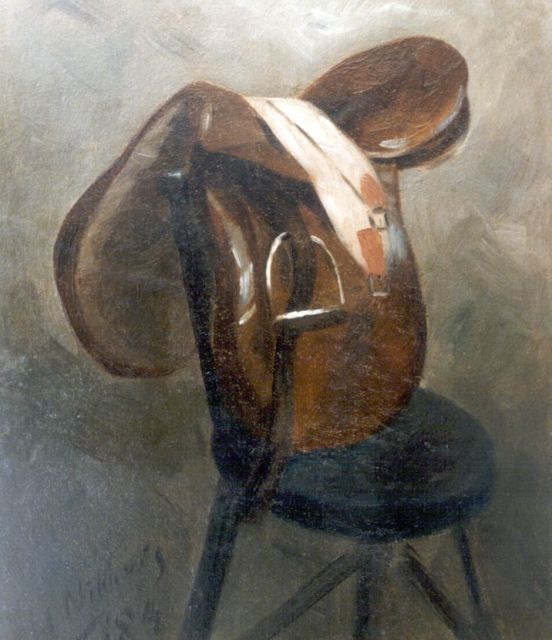 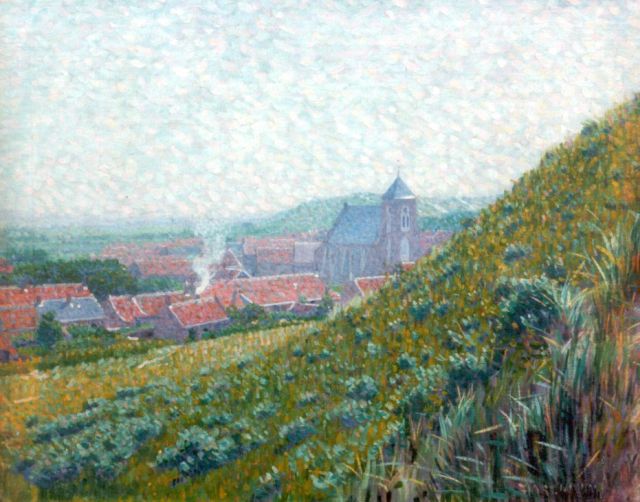 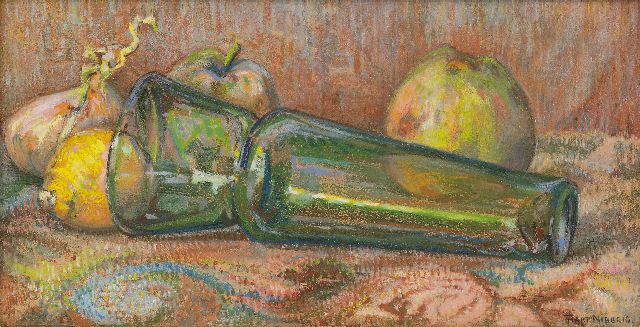 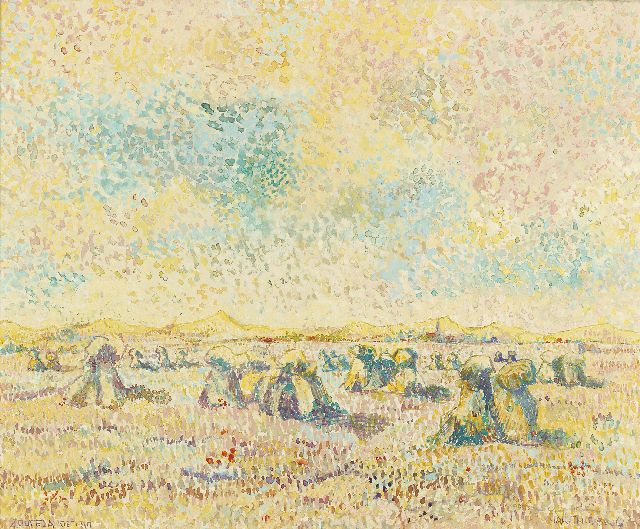 Harvest time in the dunes of Zoutelande