Guillaume Cornelis Beverloo, better known as Corneille (1922-2010) was one of the main figures of the CoBrA group (1948-1951), the most important international avant-garde movement of Europe immediately after the Second World War. The then young artists longed for a 'new poetic and pure painting in a pure language'. CoBrA members were mainly inspired by children's drawings, primitive folk art and art made by mentally ill artists. Corneille, best known to the general public for his brightly coloured, happy depictions of fish and women, initially found his inspiration in nature, in the native cultures of Africa and South America, and – through kindred spirits from Danish painters such as Asger Jorn and Carl-Henning Pedersen – in Scandinavian mythology and folk art. After a number of trips with architect Aldo van Eijck to Southern Algeria and the Sahara in the 1950s, Corneille painted for a number of years a kind of abstract city constructions and agglomerations consisting of a whimsical accumulation of shapes and lines. In the sixties he would switch to the exuberantly painted birds, women and suns with which he would become widely known, also internationally.
Corneille was born in Liège, Belgium, to Dutch parents. He was largely self-taught, but took courses at the Rijksacademie between 1940 and 1942. In 1946 he held his first exhibition in Groningen. In 1948 he founded the art movement CoBrA with Appel and Constant, which later also other Dutch painters and a few poets joined. For Corneille, the CoBrA time was mainly dominated by the experiment. Art had to be naive and above all spontaneous. An academic and intellectual approach was rejected by the Cobra artists and they mainly worked individually.
In 1950 Corneille moves to Paris where he lives with the photographer Henny Riemens. Because she captures many important moments of the CoBrA movement, she has been called the 'eyewitness of Cobra'. He frequently travels the world with her, in search of inspiration. Everywhere he gains impressions of motifs from world cultures that he incorporates in his art. Karel Appel also moves to Paris that year, where he moves into a studio on the Rue Santeuil together with Corneille. Appel turned his back on the Netherlands after a storm of criticism about him and other CoBrA artists. For example, on the occasion of their first exhibition at the Stedelijk in 1949, Het Vrije Volk wrote: 'They are bunglers, splatters, verlakkers'.
In the late 1960s, Corneille's work takes on a more figurative character and large areas of color come to the fore. He then paints in a lyrical style visions of tropical landscapes and gardens, with plants, animals and women. Corneille has since grown into one of the most popular Dutch painters of his time and his work enjoys great international renown. His lyrical style is known to the general public, especially after taking on commercial assignments such as printing pens, ties, crockery, wine labels and bed linen. From a free-spirited artist, Corneille grows into a brand name. A large part of the art world is turning away from him. Corneille says about this: 'That criticism touches me, because it is unjust'. Creativity can be found anywhere. Why shouldn't I design a pen? Or a tie? Didn't Picasso and Bracque also make vases, plates and bijoux? Here in the Netherlands it is: painter, stick to your easel! Abroad it is very common that you are also occupied with something else.'
In the last years of his life, Corneille led a secluded life in the French department of Val-d'Oise, where he lived with his second wife Natasja de Laktionoff – Henny died in 1993. He continued to work until an old age, despite ill health. Corneille dies at the age of 88 in Auvers-sur-Oise, where he is buried in the same cemetery where Vincent van Gogh found his final resting place.

for salepaintings, watercolours, drawings, prints & multiples and sculptures by Corneille 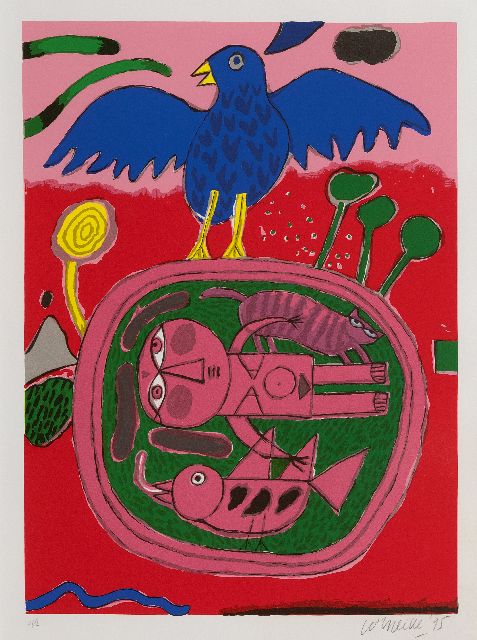 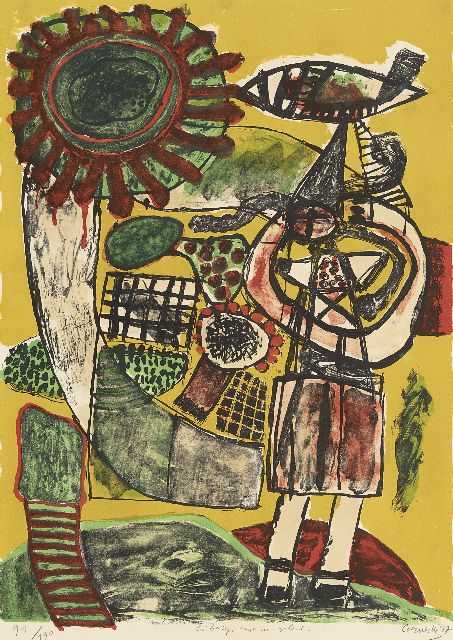 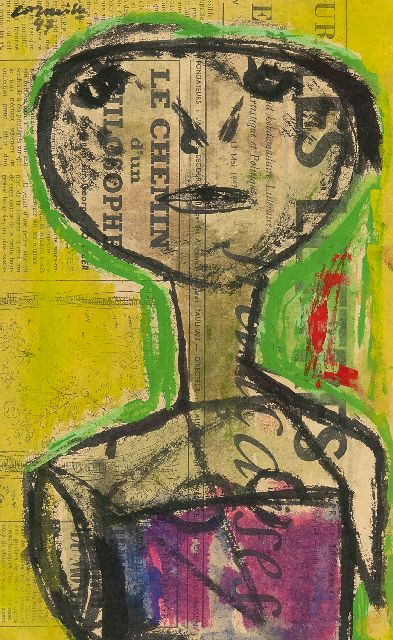