"The great gray folks," Vincent van Gogh called the art brothers of his cousin Anton Mauve in his letters to Theo. He referred to the painters who became known under the name of The Hague School, with as most important representatives Jozef Israëls, Hendrik Willem Mesdag, Johannes Bosboom and the landscape painters Willem Roelofs, Anton Mauve, Johan Hendrik Weissenbruch, Paul Joseph Constantin Gabriel and the Jacob brothers, Matthijs and Willem Maris. Van Gogh's description was not intended to be negative. He was full of admiration for the innovation that these residents of The Hague brought about in Dutch landscape painting, because they broke away from academic traditions and painted nature in a more realistic, truthful way. With "new" eyes they looked at the landscape around them and registered in rapid, spontaneous brushstrokes their impressions of mood and atmosphere, the seasons, the weather, the moments of the day. The images that "ordinary" Holland provided them for this were endless: misty water landscape in the morning, swampy, green polders with mills or cattle, the coast with its fishermen and changing cloud formations above the water or extensive, flat meadows. In 1875, the art critic J.J. van Santen Kolff in De Banier magazine, this group of like-minded painters named the "Hague School". The figure painters David Artz and Bernard Blommers were included, as well as Louis Apol, who focused almost exclusively on winter landscapes.

The landscape painters of the French Barbizon School were an example of this new, realistic-impressionist attitude towards nature. Following in the footsteps of these "paysagists", the Hague School painters preferred to no longer work in the studio, but to go out into the great outdoors with canvas and easel. The glorification of sunlight in bright colors for which the French Impressionists fought their battle was not the main focus in the mood landscapes of these painters, with perhaps Willem Maris as the exception. Their work therefore does not have that color and that fleeting touch. The palette is more subdued, tonal, the brushstroke strong and structured. The hues of the Dutch landscape and the often cloudy weather play a major role in this, but above all these "sons of the misty north" sought the enchantment of the tone, in which the colors were carefully matched and variegation was avoided. The words of Gerard Bilders, already written in 1860, have become a manifesto of this: 'I am looking for a tone, which we call colored gray, that is all colors, however strong, brought together in such a way that they give the impression of a fragrant, warm gray '.

In 1875 the art critic J.J. van Santen Kolff in De Banier magazine, this group of like-minded painters named the "Hague School". The figure painters D.A.C Artz, B.J. Blommers and Albert Neuhuys were included, as were Louis Apol, Gerard Bilders and Philip Sadée. Neuhuys would later, together with Mauve, be considered the founder of the Laren School.
The heyday of the Hague School lies roughly between 1870 and 1885. After that, its role as a renewal movement was taken over by the Amsterdam Impressionists, Symbolists and Neo-Impressionists. The painters who subsequently worked within the sphere of influence of the Hague School - students, painters' friends, family and fellow citizens - are counted among the so-called "after-bloom". There is no unanimous opinion about who belongs to them. Willem Bastiaan Tholen, Willem de Zwart and Théophile de Bock are in any case counted among them. Painters such as Pieter ter Meulen and Geo Poggenbeek also, depending on the period and the depiction, as well as Cornelis Scherrewitz and Gerhard 'Morgenstjerne' Munthe in their Katwijk beach scenes with fishermen and ships.

Weissenbruch was praised for his atmospheric and spatial representation of the Dutch landscape. He painted his first images of nature near The Hague, after which he moved into the polder in the 1960s. First he worked around Boskoop and Gouda, before finally found his painter's paradise in 1875 in the area of ​​Noorden and Nieuwkoop. The vast polders and ponds, but also sea and beach under changing cloudy skies gave him space, air and light, from that moment on the most important subjects in his paintings and watercolors. In fine, delicate nuances he managed to suggest the unlimited space of a Dutch (water) landscape. For a long time, until about 1880, Weissenbruch painted many details in his landscapes, but gradually simplification took place: his mature style shows a sober composition, simple shapes, a subdued color palette and the typical, clear "Weissenbruch light". In his last years, Weissenbruch was increasingly fascinated by space, simplicity and light, experimenting with the limits of the possibilities with paint. It has been suggested that in the end he was no longer concerned with the landscape, but with the effect of weather and light on that landscape.

Willem Roelofs has been called the great inspirer of the Hague School. He was one of the first to travel to Barbizon from his hometown of Brussels in 1850 and his ideas were echoed by the painters who lived and worked in The Hague. Bosboom, Weissenbruch and the Maris brothers were born there. Mesdag came to live there in 1869 and Israels in 1871, the same year that Jacob Maris returned from Paris. Anton Mauve came to The Hague a short time later, Roelofs' pupil P.J.C. Gabriel in 1884 and three years later Willem Roelofs eventually settled there himself. Although their ages were far apart, these painters consciously manifested themselves as a group. Their headquarters was the Pulchri Studio Society, founded in 1847, where they held art reviews and exhibitions, as well as their famous winter festivals with tableaux vivants and farces. In 1876 they also founded the Hollandsche Teeken-Maatschappij. 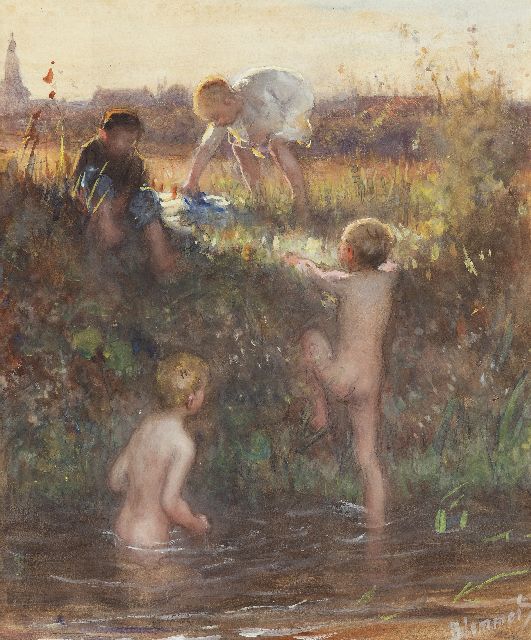 Dune landscape near The Hague, 1897 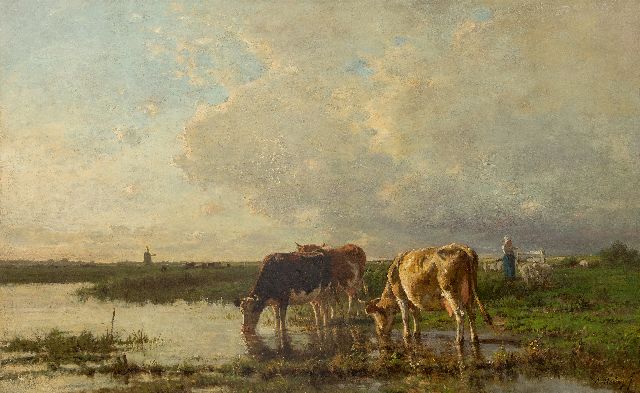 Drinking cattle by the river 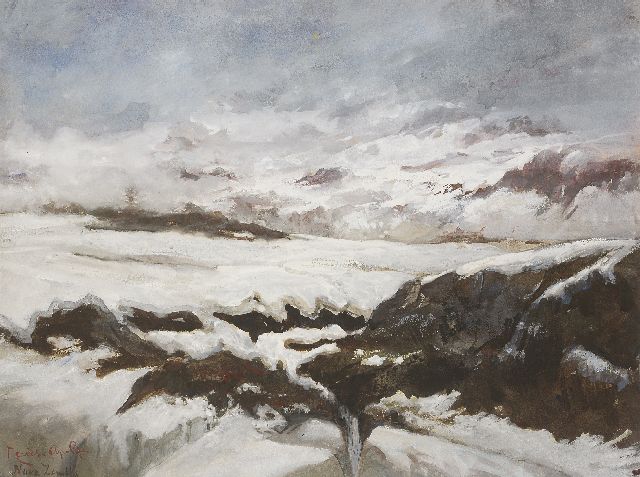 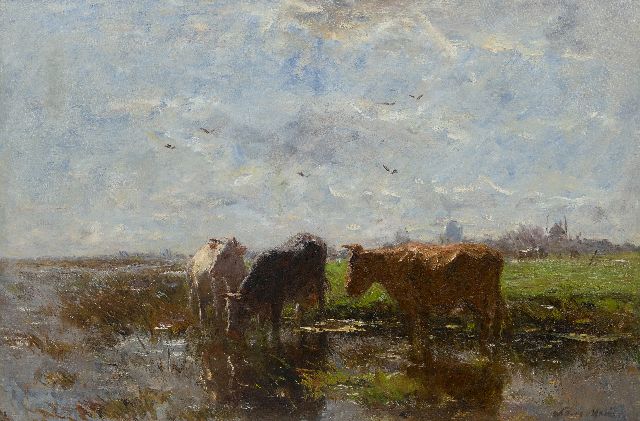 Drinking cows in a polder landscape 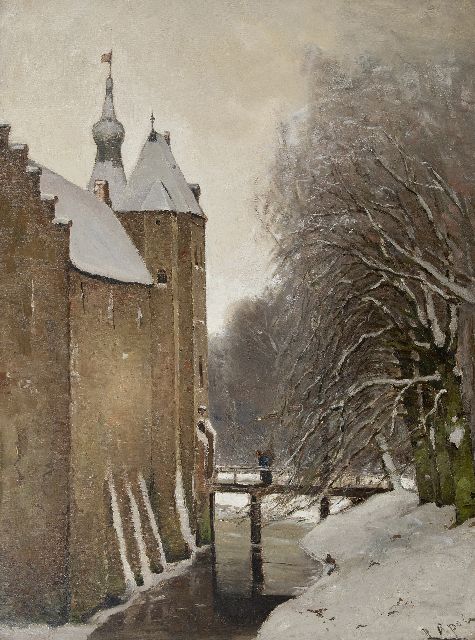 The castle of Doorwerth in winter 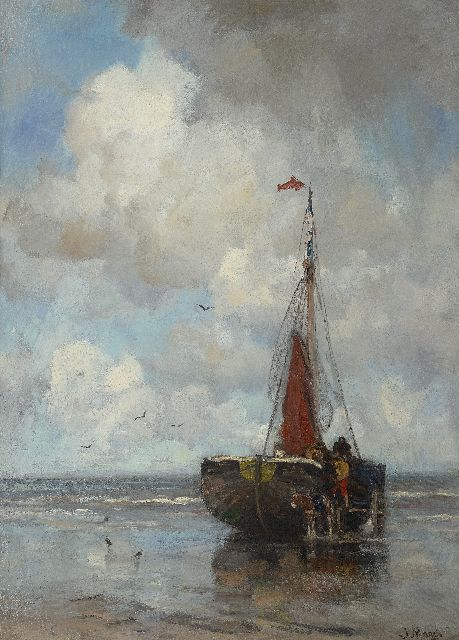 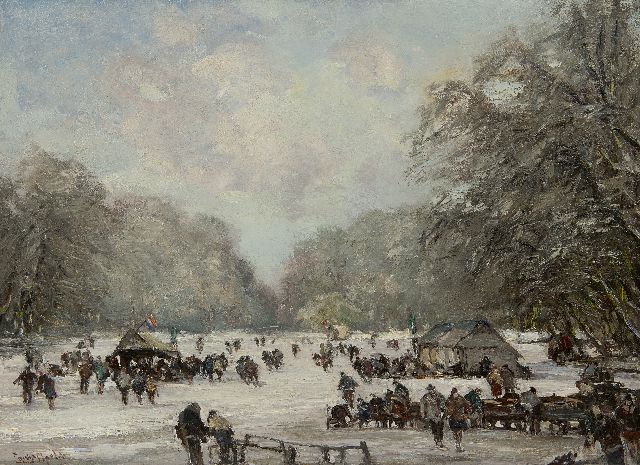 A crowd enjoying skating on the pond in the Haagse Bos 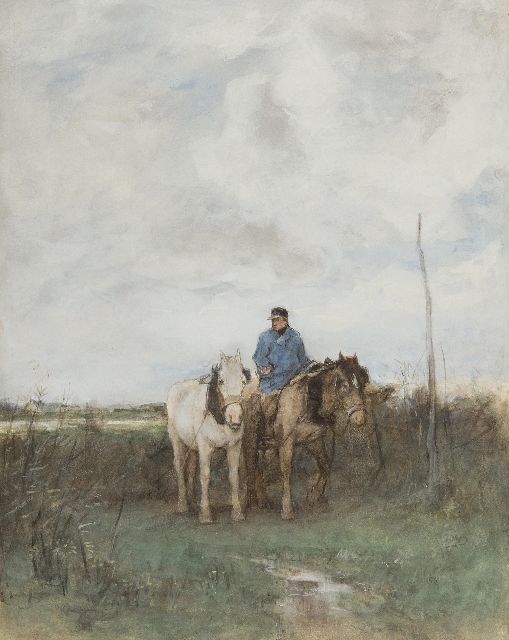 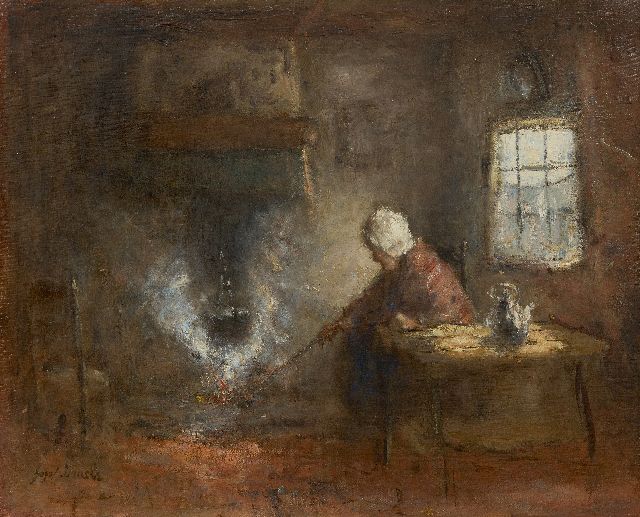 At the cooking pot 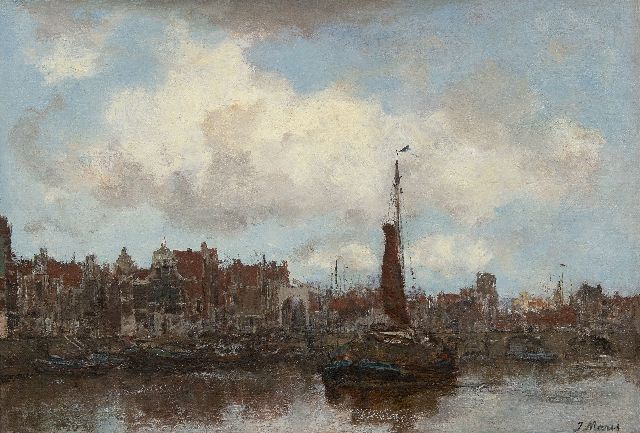 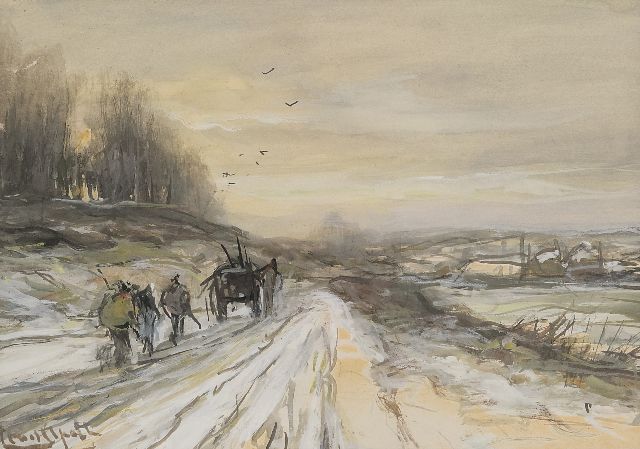 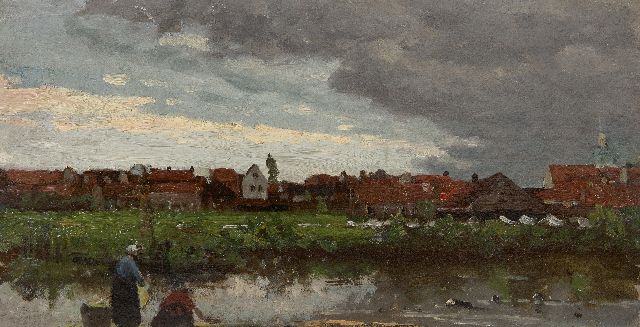 Bleaching fields along a river 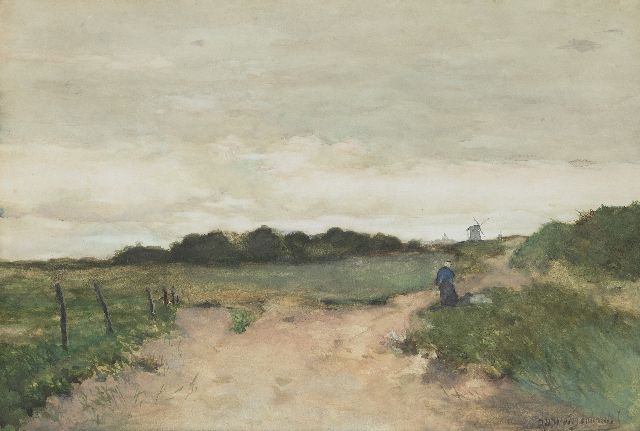 Fisherwoman on in the dunes near Noordwijk

Stranded boats on the beach of Scheveningen at low tide, 1901 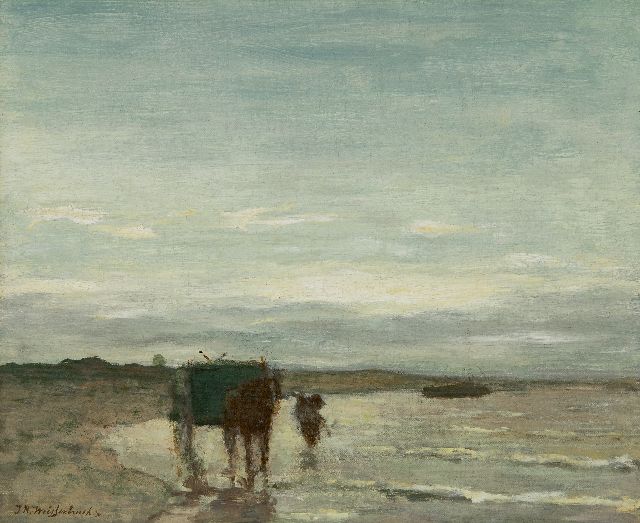 Shell fisherman in the surf 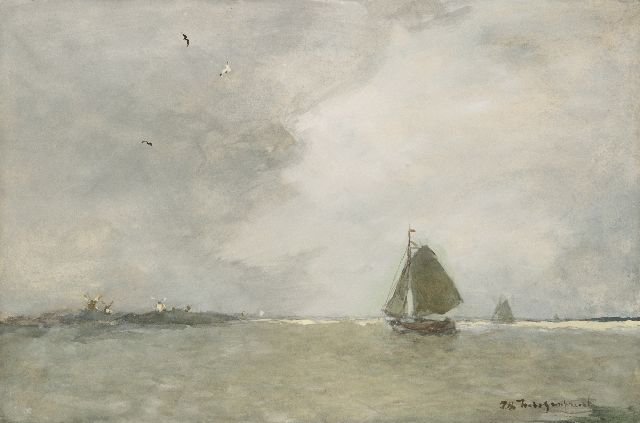 Sailing ships on the lake 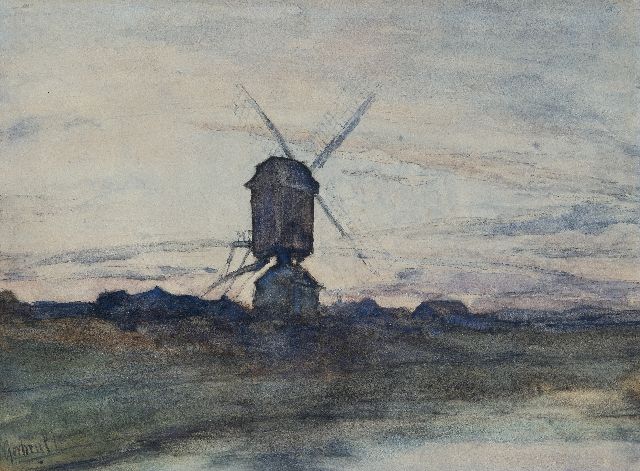 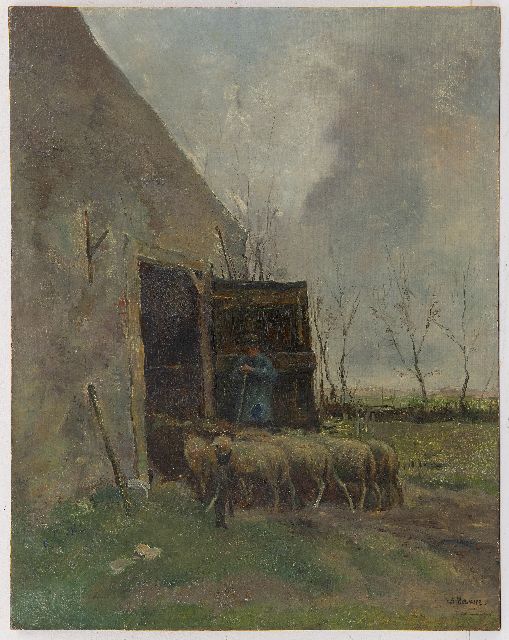 Sheep and shepherd at the barn 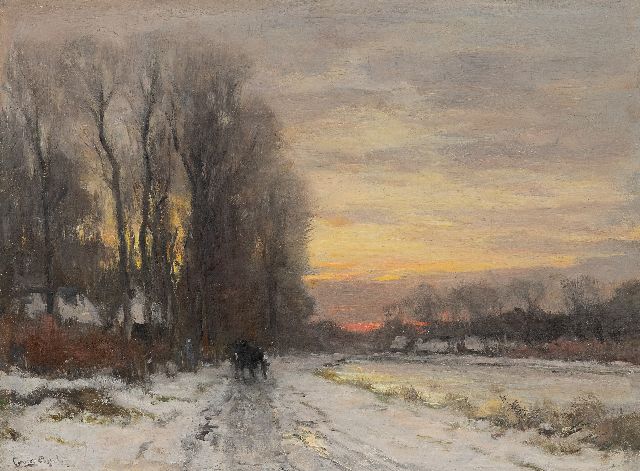 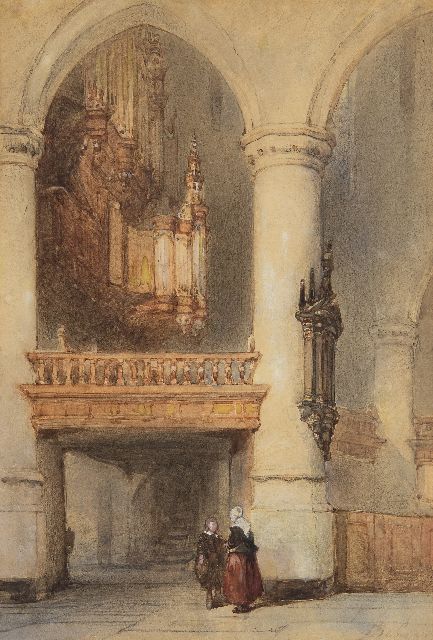 Interior or the oude Kerk in Delft 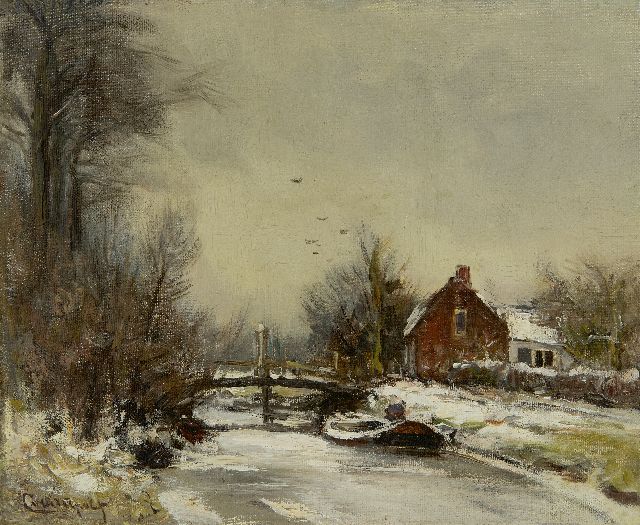 Winter landscape with a house on a canal 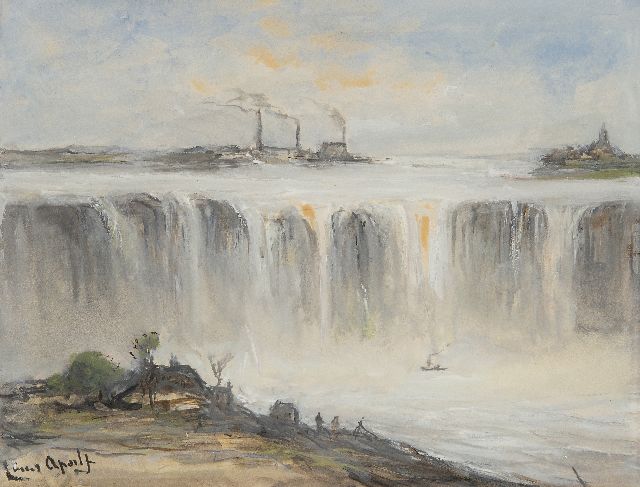 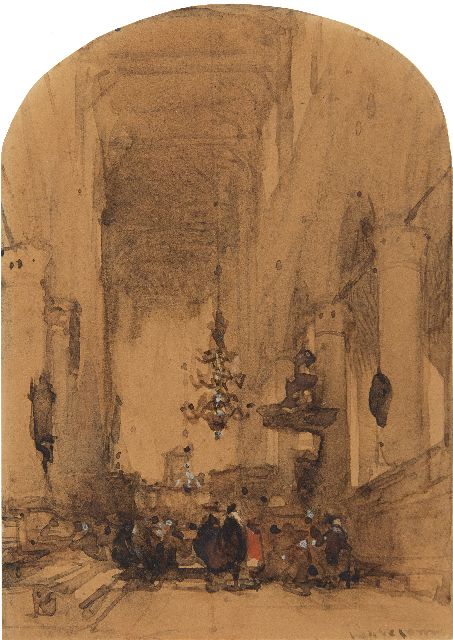 Figures in the Pieterskerk, Leiden 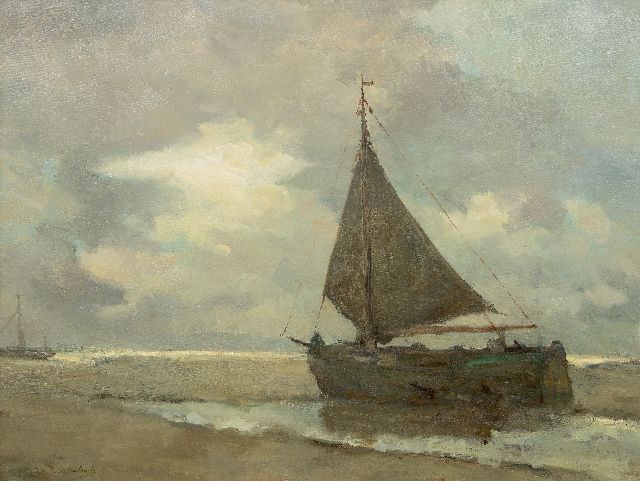 Ship on the beach of Zeeland 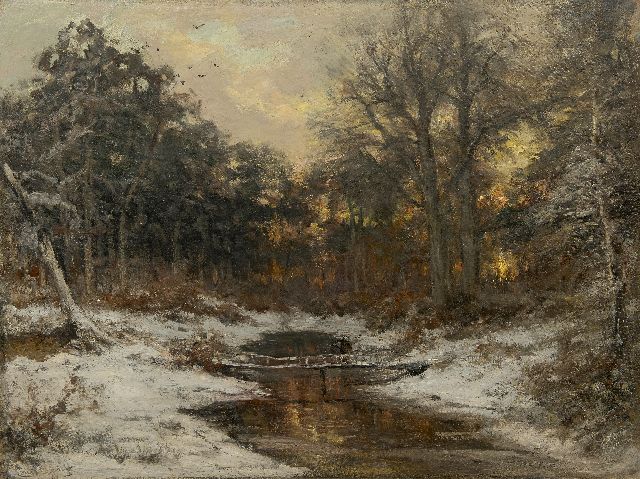 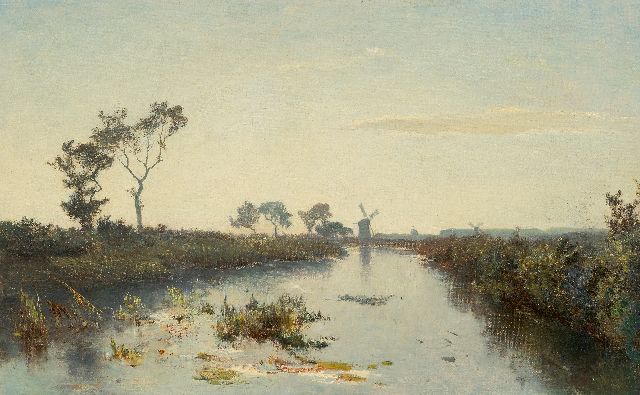