A frozen canal that leads to infinity, a cake-and-zopi tent, frozen boats and skaters; together they depict the ice scene as people like to see it. As early as the 17th century, painters specialized in winter landscapes that the buyer experienced as typically Dutch. Hendrick Avercamp became famous for his ice entertainment and skaters, for which he found examples in his immediate vicinity. In the 19th century, when many Dutch artists consciously sought a connection with 17th century painting, the ice scene was a popular and widely practiced genre.

The "Claude Lorrain of Winter Scenes"
Andreas Schelfhout was one of the most famous ice-view painters in the early 19th century, praised by critics as the "Claude Lorrain of winter scenes". Nobody surpassed him in the depiction of the deep black, reflective ice, the jagged cracks and skate tracks, the play of light and shadow and high, spectacular cloudy skies. The refined elaboration and realistic details were also reasons for its popularity. Schelfhout had many pupils, including Charles Leickert, Nicolaas Roosenboom and Johannes Franciscus Hoppenbrouwers, who faithfully followed their teacher in terms of composition and elaboration. It was very different with his student J.B. Young child. "Skaters and push sledge on frozen canal", painted in 1844, is one of his earliest ice scenes and was still entirely influenced by Schelfhout. At the time, Jongkind was still working in the master's studio, although he was already gaining some fame. Two years later, in 1846, he left for France. He continues to paint Dutch ice scenes there because they are very popular with the French. But Schelfhout's precise brushwork and romantic composition are hard to find. He exchanged these for the fast, loose strokes that would give him the reputation of forerunner of Impressionism.

Haage School, Impressionists and Luminists
The painters of the Hague School set out to capture nature 'en plein air', but are less attracted to frozen canals and fun on the ice. Painters such as Anton Mauve and Louis Apol may paint the winter landscape, but the emphasis is on the representation of the mood in nature. Yet there are also contemporaries who use the Dutch ice fun to capture the special light and the impression of the moment. The Rotterdammer J.H. van Mastenbroek may have been influenced for his icy face by Jongkind, who was friends with his father. But he was also an active skater, who in winter regularly joined the irons on the Rotterdam lakes or made trips through the snowy South Holland polder landscape. Outside, he made sketches on the spot, "impressions", which he worked out in his studio, with the impressions still fresh in his mind. Amsterdam luminist H.J. Wolter often painted quickly, outdoors, so as not to miss any of the impressions he could gain in that brief moment. And although the skaters are clearly present, the narrative element has been completely let go and the ice face has become a colorful and tingling impression of a sunny, winter skating day on the Boerenwetering. 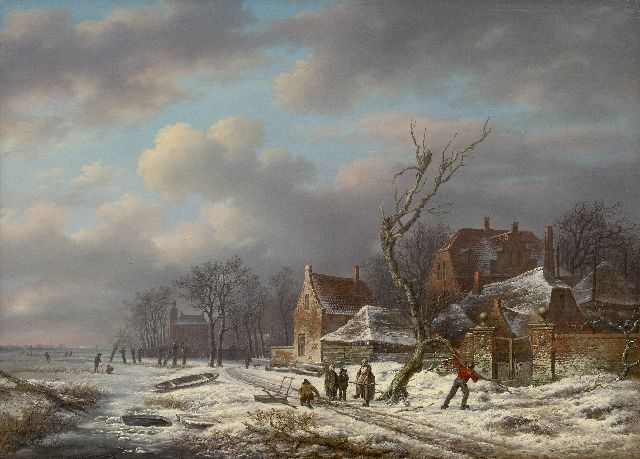 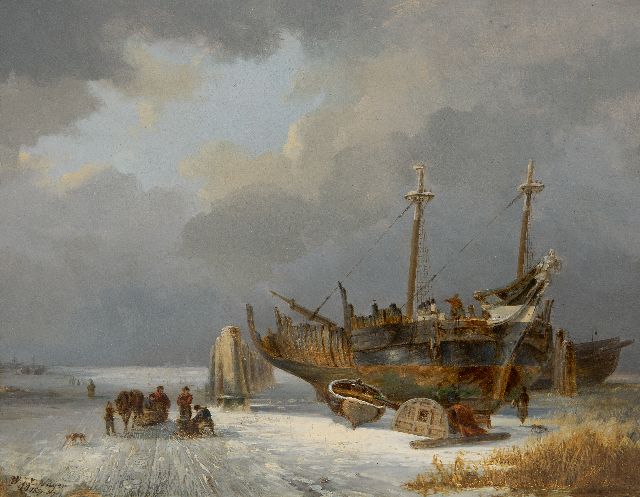 Frozen landscape with figures and a shipyard, 1830 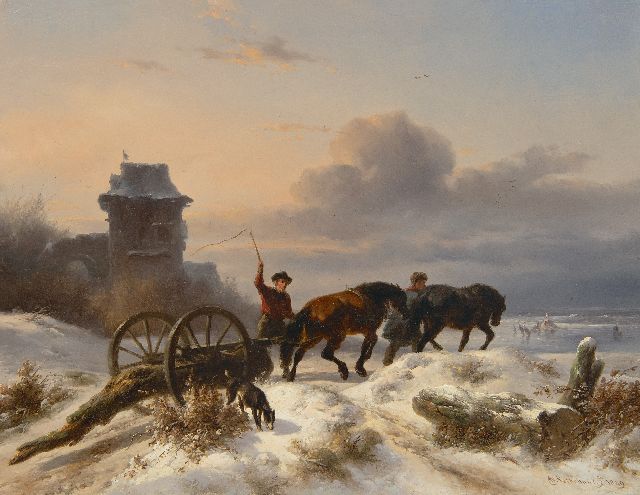 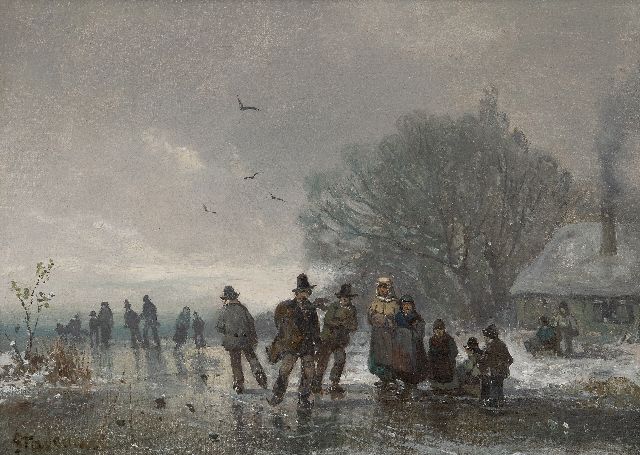 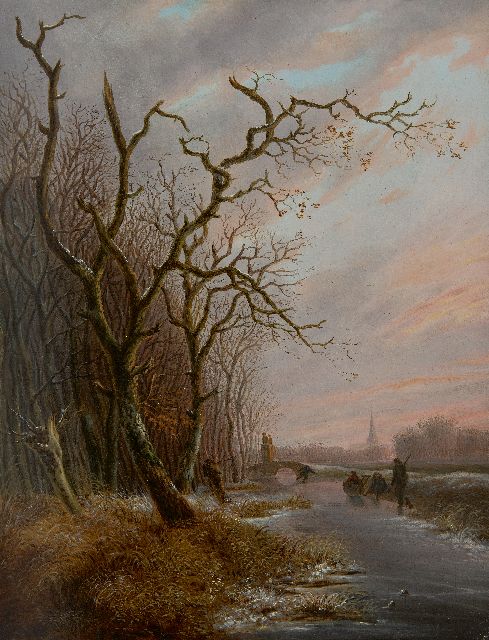 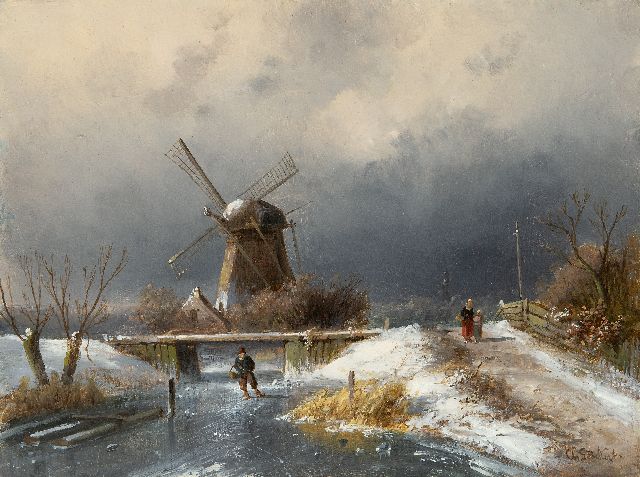 Skater on a frozen water at a windmill 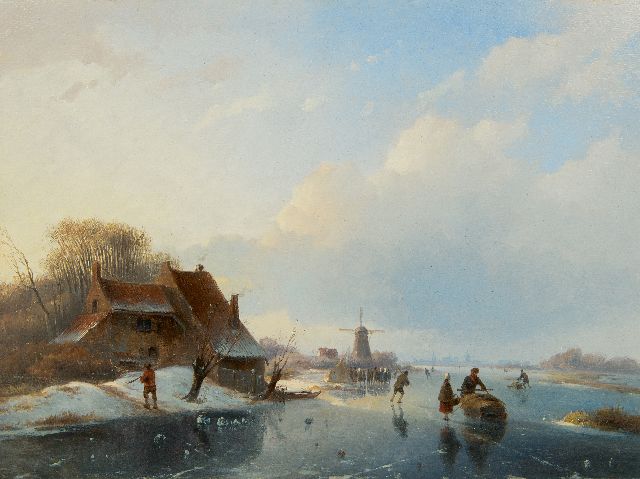 Clear winter's day on the ice 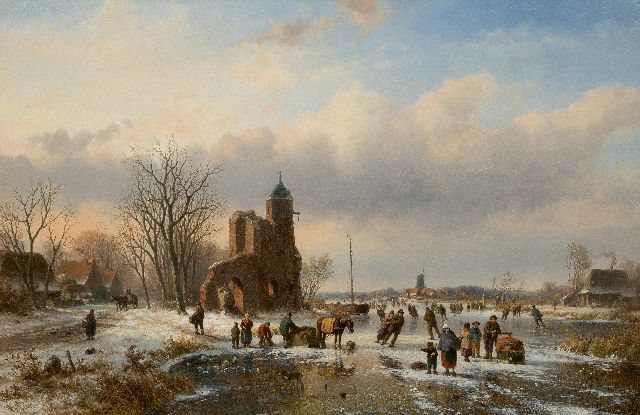 Skaters on the ice near a castle ruin 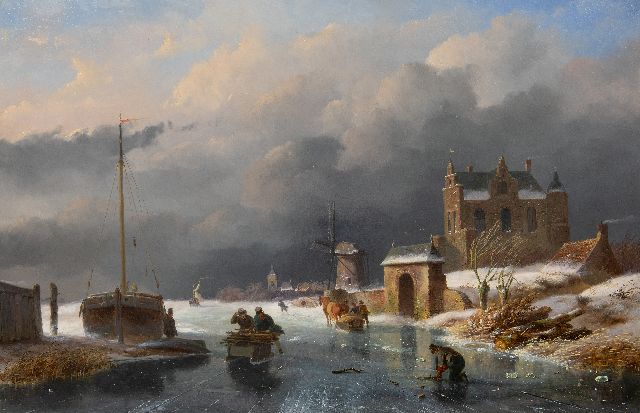 Figures on the ice in an approaching storm 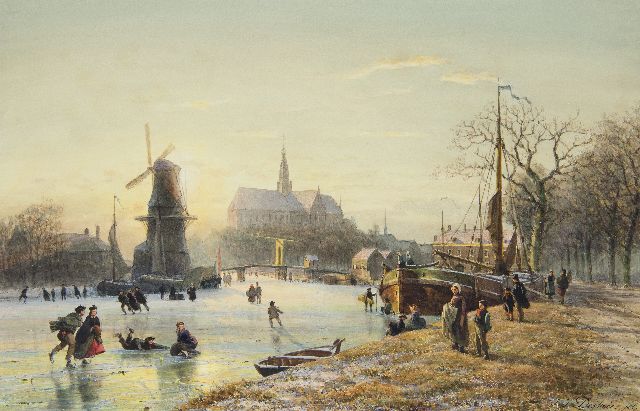 Skating on the Spaarne with the windmill De Adriaan and the St. Bavokerk, Haarlem 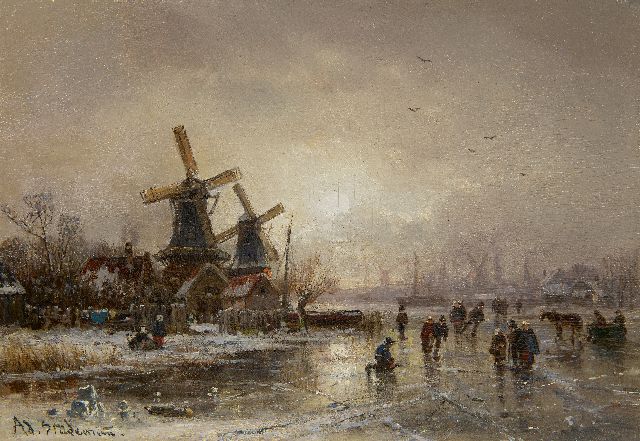 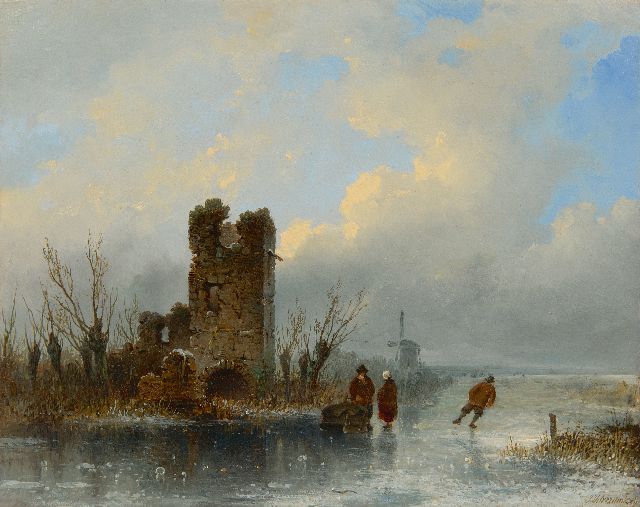 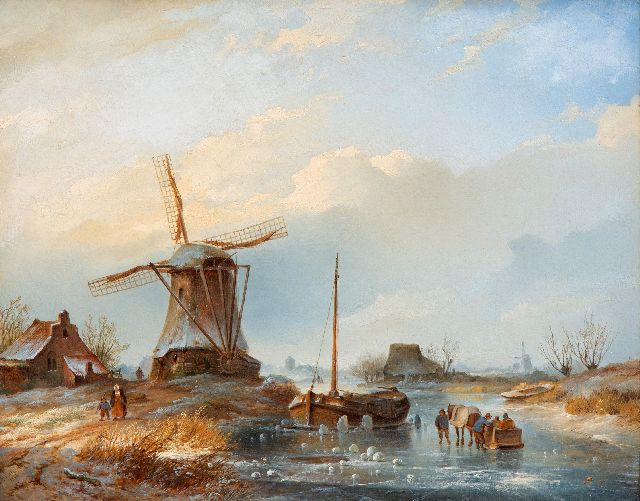 A cold winter´s day with figures on the ice near a windmill, 1842 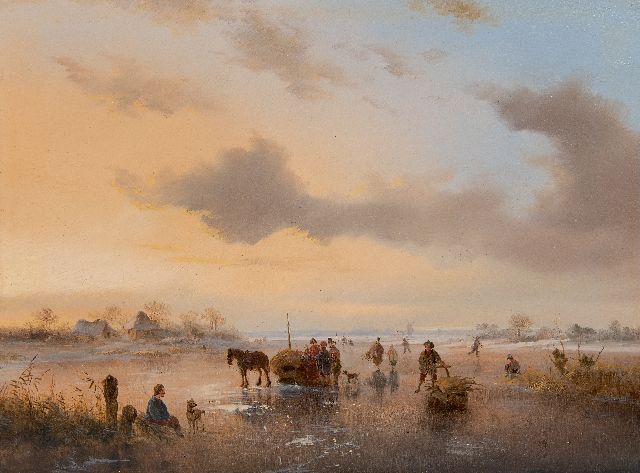 A frozen river with figures and sledges 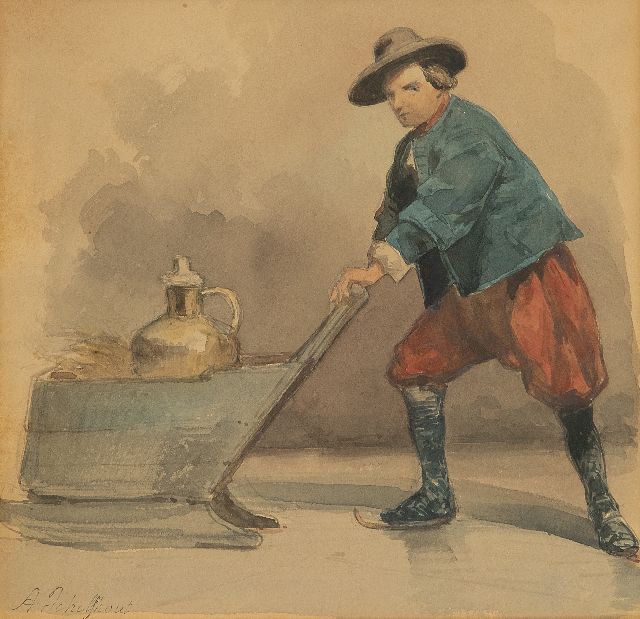 Skater with a copper milk can on a sledge 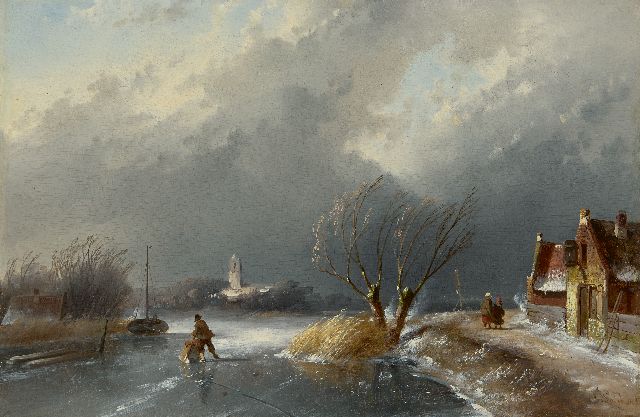 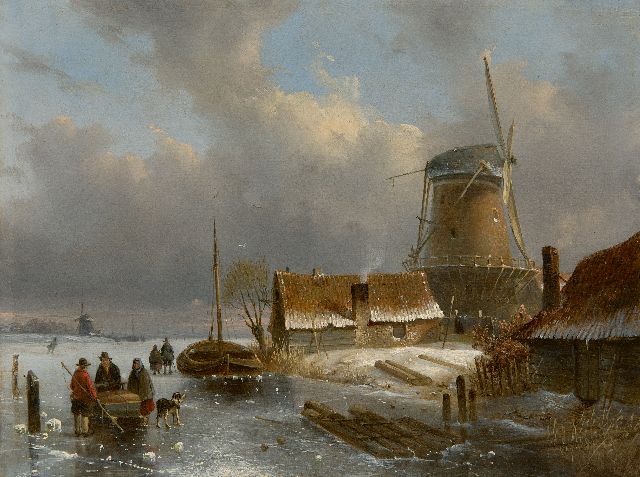 Dutch winter landscape with a sledge and figures on the ice, ca. 1845 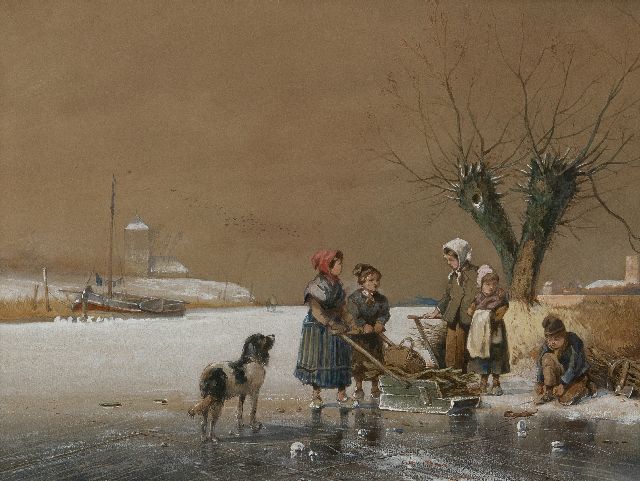 Children on a frozen river 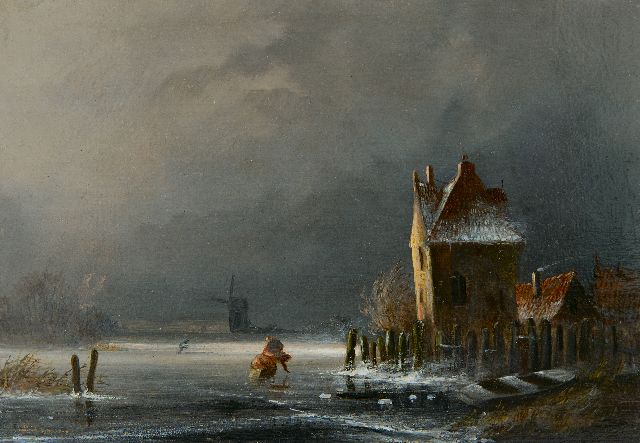 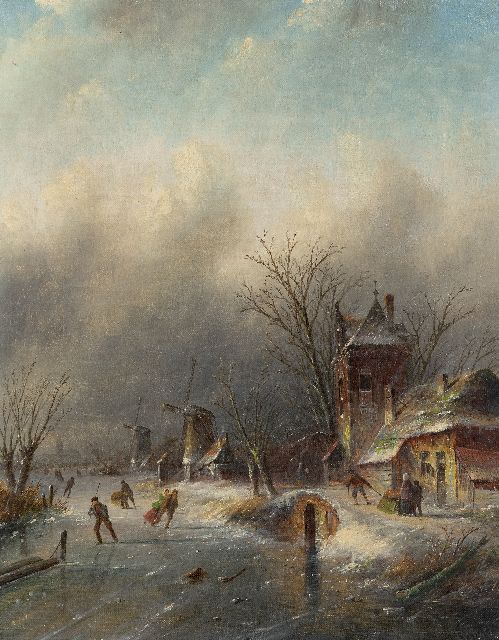 Skaters on the ice in an upcoming snowstorm 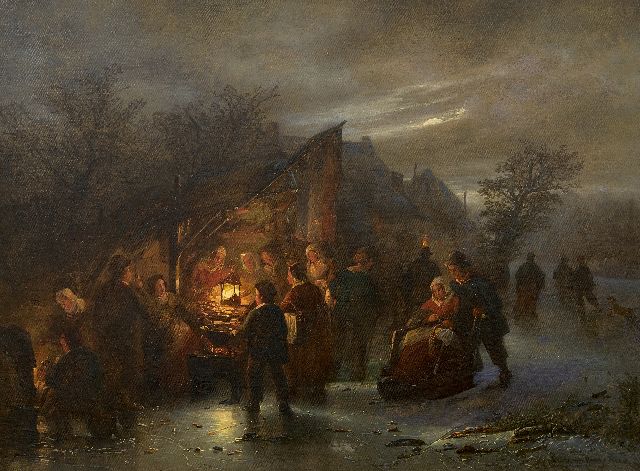 Night scene on the ice by a koek-en-zopie 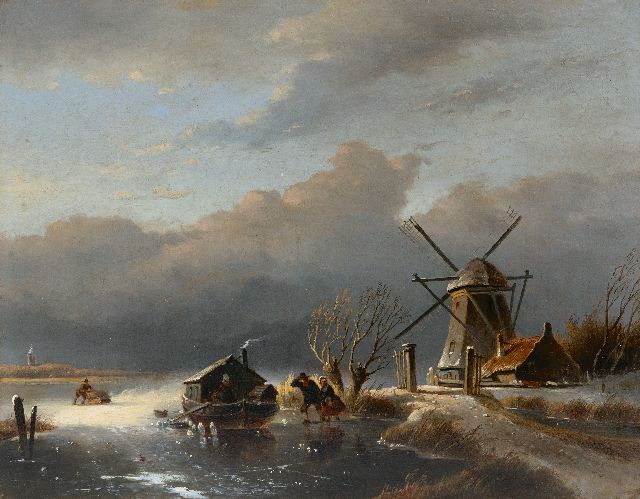 Ice scene with figures and a barge stuck in the ice 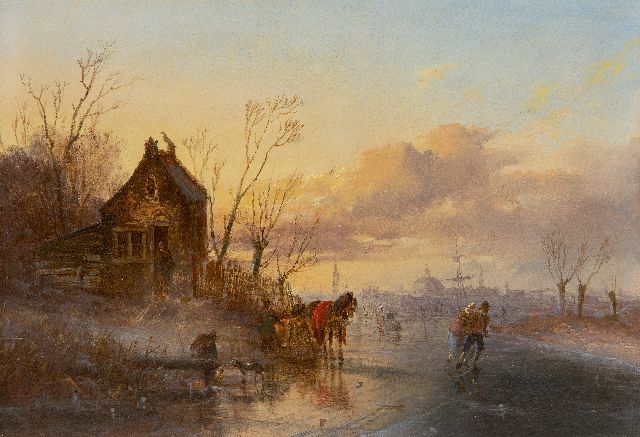 Winter landscape with skaters, a town in the distance 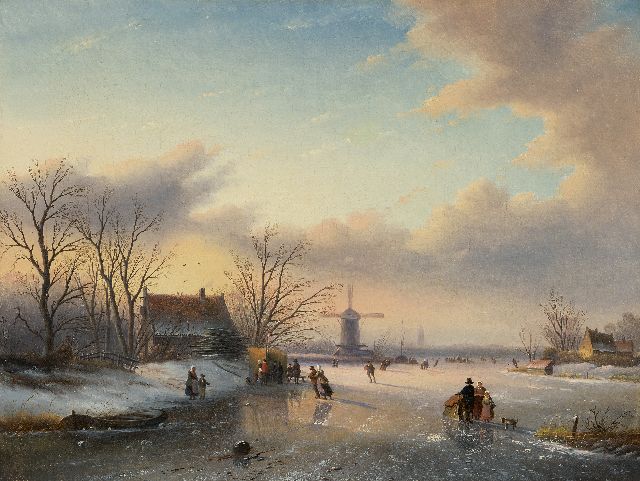 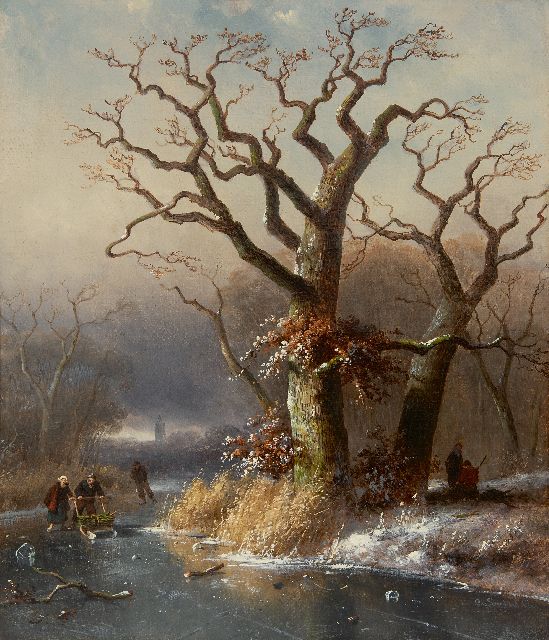 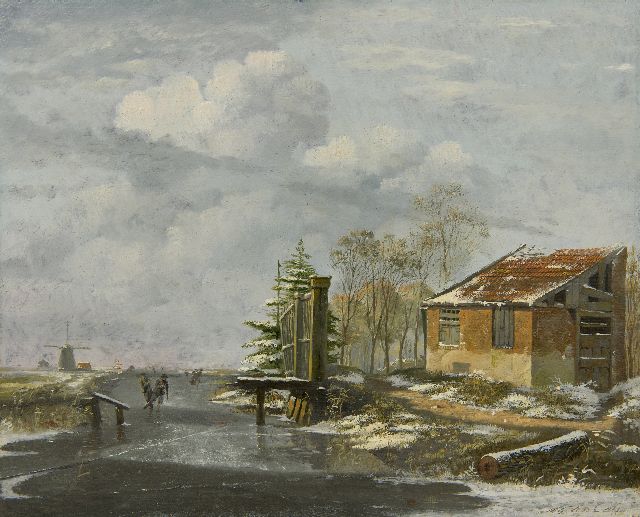 Skaters in a snowy winterlandscape

12...18
12 months exchange right
lifelong authenticity guarantee
valuation report for insurance
restored in our own studio
art historic documentation
advice hanging and lighting
new or original frame
ready to hang
We and our partners use functional and analytical cookies for website optimization, statistics and personalized advertisements. By using our website or entering into an agreement, you indicate that you accept our privacy policy.
Read more I accept
Lees meer