In the eighties of the 19th century, a group of young painters also formed in Amsterdam who depicted daily life in the capital in a direct, expressive way. These Amsterdam Impressionists included George Hendrik Breitner, Isaac Israels, Willem Witsen, Eduard Karsen and the early Jacobus van Looij. These artists moved into the circle of the Tachtigers, a group of writers and poets who used the motto Art is passion. For the Amsterdam Impressionists, the painting was partly the expression of an artist's feeling and brushwork and palette had to be tailored to the subject. In contrast to their fellow painters from The Hague, who mainly depicted the affluent city life, they found their subjects on the street. They found inspiration in popular cafes and dance houses and traveled to impoverished neighborhoods, harbors and construction sites, the places where the life of the common man took place. The Amsterdam artists put their impressions on the canvas with a moving, sometimes fierce brushwork and a dramatic, dark color palette of browns, reds and black, with white accents. This expresses his strong personal and social involvement in the gray life of these people.

In 1870 it was clear in Amsterdam that education at the Royal Academy needed to be modernized. There was constant criticism of the rigid rules that dictated what was beautiful and how it should be portrayed. The answer was the foundation of the National Academy of Visual Arts. The painter August Allebé, professor and later director (1890-1906) from 1880, carried out the important innovations there. Under his leadership, the Rijksacademie became a stimulating environment in which talent was given space and where reality was sketched and drawn. In addition, female students were admitted fairly soon after it was established. Allebé created a special "ladies class" for them. Because of his vision and guidance, Allebé has created the "Painters of Eighty", a group of largely young artists who believe that art should not only represent what is perceived, but also be passionate, free and personal. Painters such as Jan Toorop, Isaac Israels, Jan Voerman, George Hendrik Breitner, Willem Witsen and Jacobus van Looy grew into leading artists. A number of them are referred to by the name "Amsterdam Impressionists". While the Romantic painters in Amsterdam were devoted to the city's history, the Amsterdam Impressionists were mainly looking for the dynamics of urban life. Everyone went their own way in portraying this. After all, they were concerned with a spontaneous, free expression of the artist as an individual. They found inspiration in the street.

Breitner had enrolled at the Rijksacademie in 1886. Walking through the city he wanted to soak up the real atmosphere, the movement, the hustle and bustle of the ordinary people. He became good friends with Isaac Israels, who, like him, traversed the city in search of the real Amsterdam. The two lived one above the other from 1888 to 1891 in a studio house on the Oosterpark. They both painted a lot on the street, for which they still had to ask permission from the municipality at that time. Willem Witsen, who worked a lot at the academy with W.B. Tholen, painted another Amsterdam: the hushed city, often in unusual cut-outs. In contrast to the busy city impressions of Breitner and Israels, Witsen saw the city as a monument of timeless beauty. Its Amsterdam canals with freshly fallen snow clearly bear witness to a different vision than Breitner's pedestrians and carts plowed through melting snow. Witsen was also good friends with Van Looy, with whom he traveled to Paris in 1882. George Hendrik Breitner Breitner was actually the example of the restless artist who, due to his great talent, found it difficult to find his feet. He was born in Rotterdam in 1857 and left for The Hague in 1876, where he took lessons until the mid-1880s at Prof. Dake's Drawing Class, in the garden of the Rijksacademie Amsterdam, ca. 1907-1908. He became a member of Pulchri Studio and engaged in the painting of the Panorama Mesdag. In the years 1882 and 1883 he regularly went to see Vincent van Gogh, with whom he often walked down the street "to look for figures and nice cases", as Van Gogh described it. In 1886 Breitner moved to Amsterdam, which would become his source of inspiration and field of work. The city prompts him to paint daring oil paintings of pedestrians by night, maids, the old neighborhoods, the breakthrough, in sketchy, broad strokes and a brown-black palette with here and there contrasting red and white. The general public does not understand him and finds his work "unfinished". Isaac Israels Israels paints the shopping streets, the dance tents on the Zeedijk, the cafes and theaters with the same directness. His style is lighter and more graceful than Breitner's. In summer he is in Scheveningen, where he records the beach and the boulevard in fast, virtuoso brushstrokes and a sunny palette. In 1903 he moves to Paris, where he lives for ten years. After that he lives in London and eventually returns to The Hague after many years. Floris Arntzenius Breitner and Israels traveled from The Hague to Amsterdam, Floris Arntzenius came to Amsterdam in 1881 to learn to paint under Allebé and then left for The Hague. It is striking that his work remains imbued with the Amsterdam city feeling, which is also reflected in Breitner's work. Even on its beaches we see well-dressed townspeople, as was common in his time. Typical of The Hague is the strong emphasis on mood and atmosphere in his cityscapes, with which he was very successful. 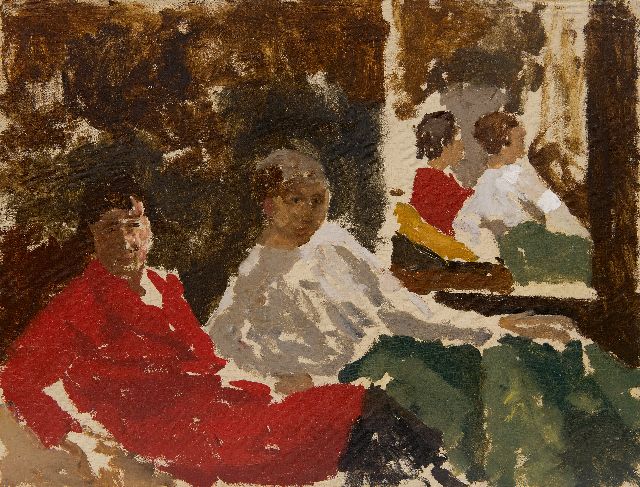 Two women seated in front of a mirror 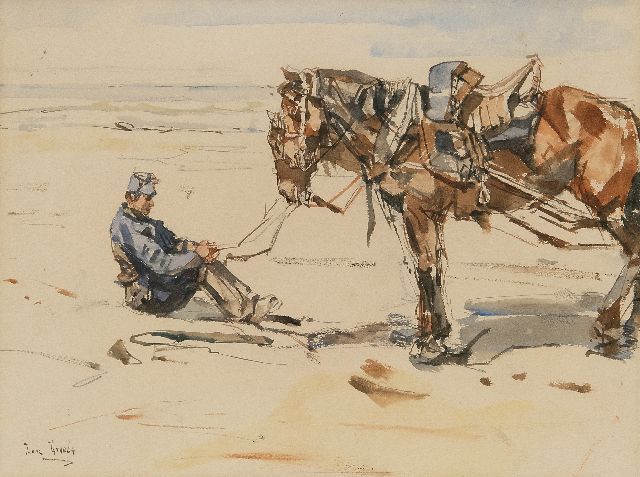 A gunner on the beach 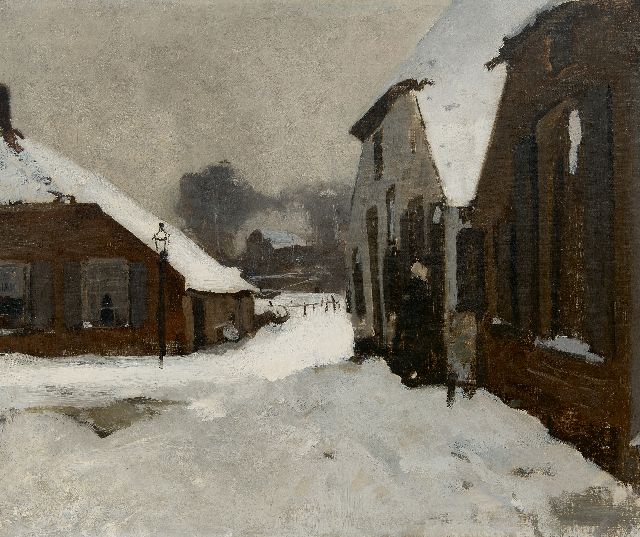 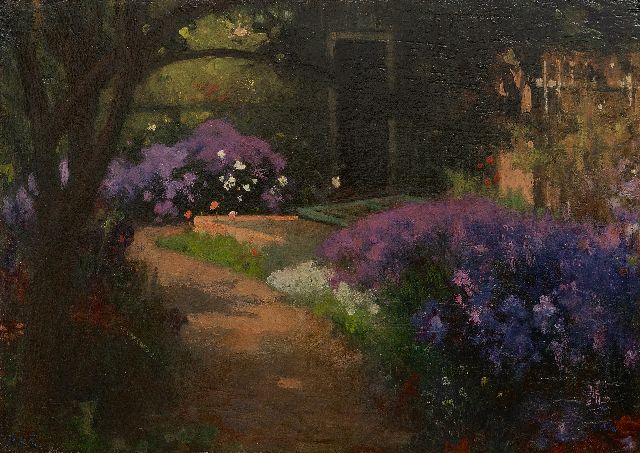 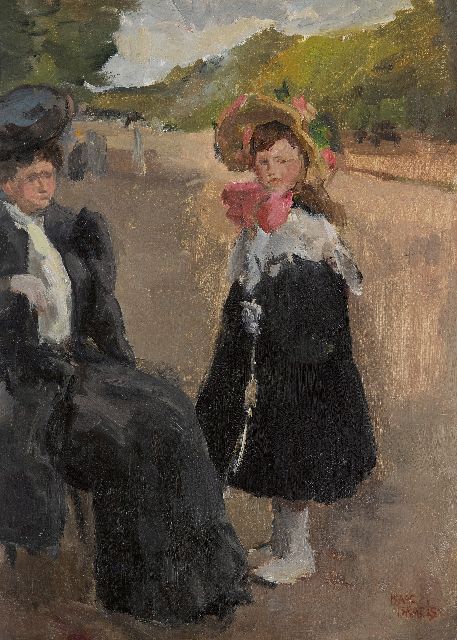 Sari Cohen (the cousin of Isaac Israels) and her daughter Eida on the Champs-Elysées in Parijs, ca. 1914 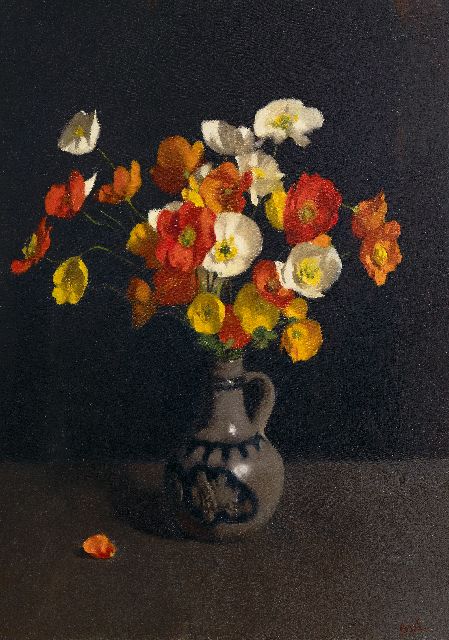 Poppies in a stone pitcher 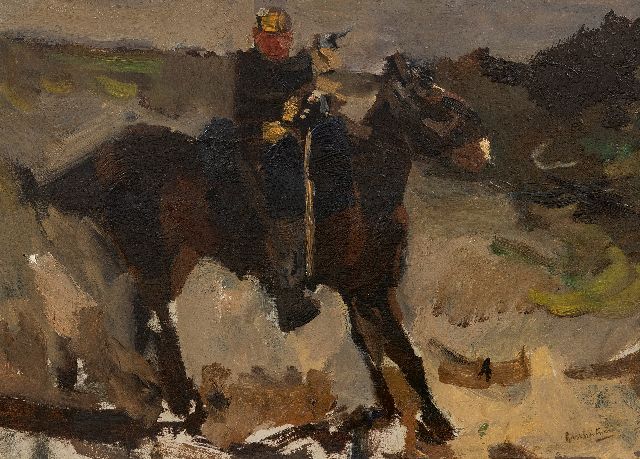 Hussar on a horse 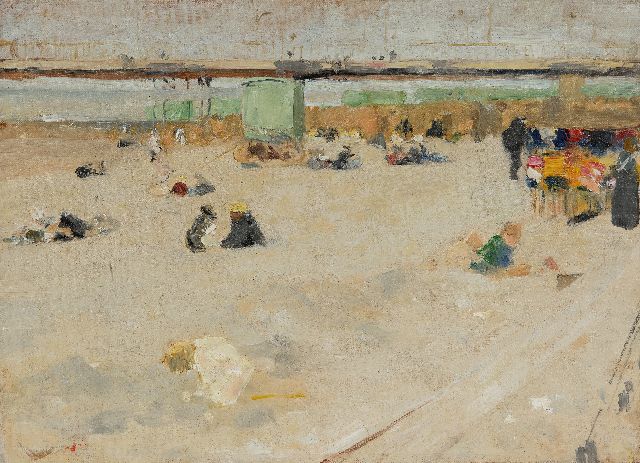 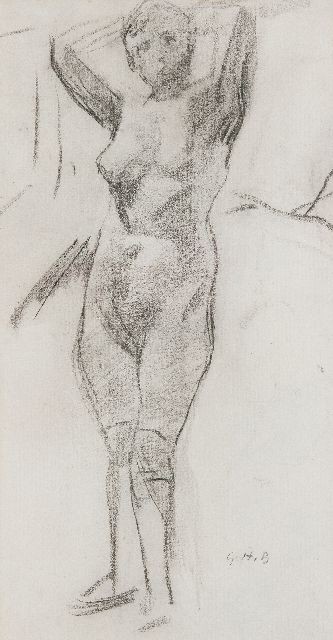 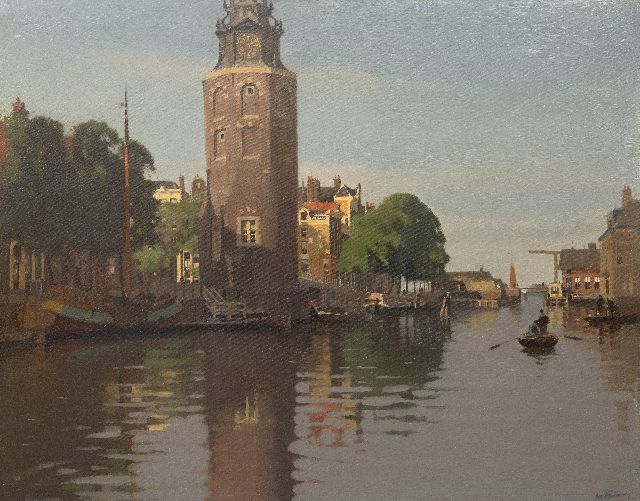 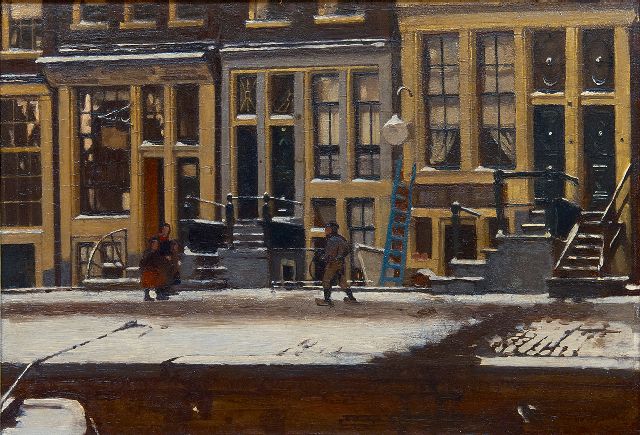 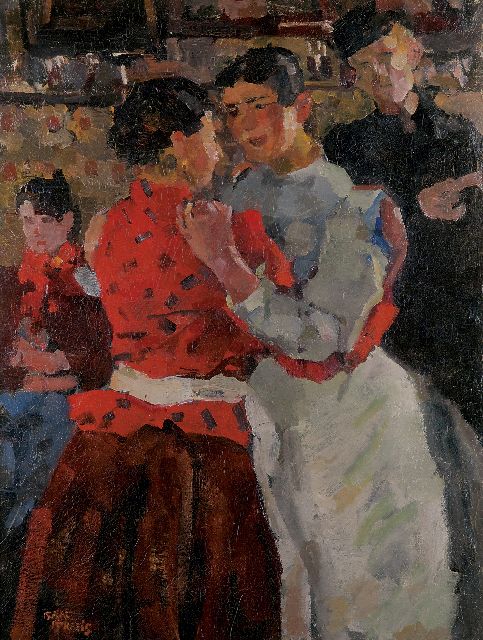 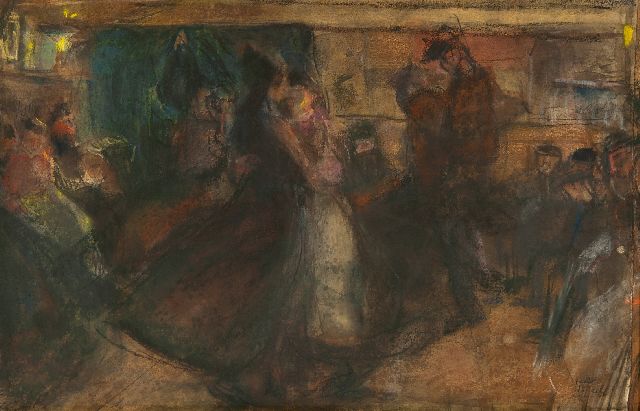 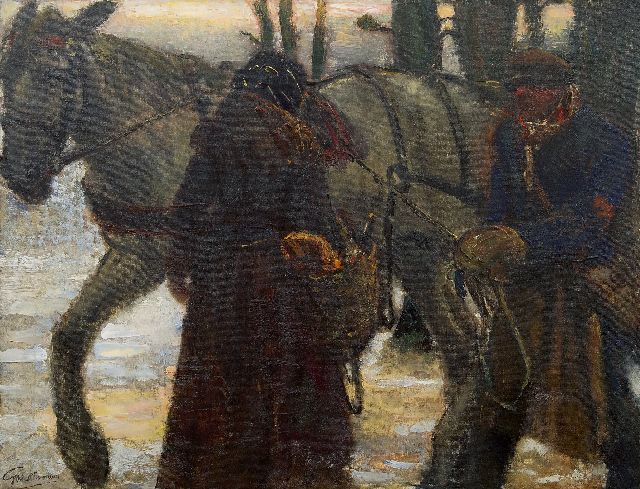 Figures standing beside a draught horse 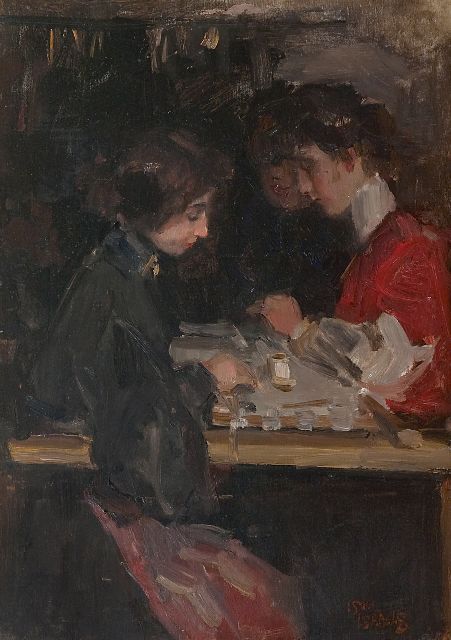 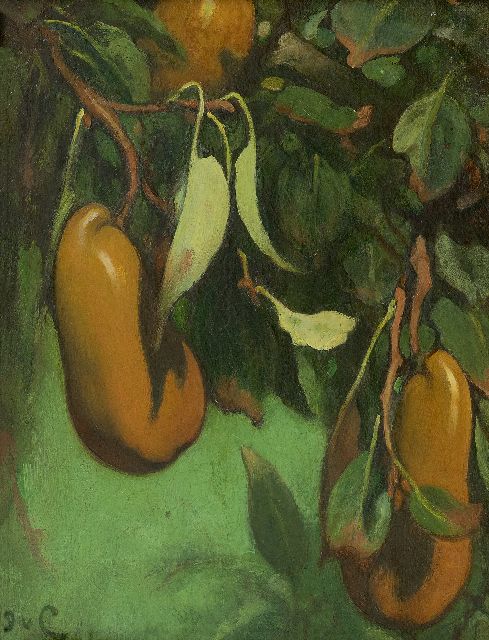 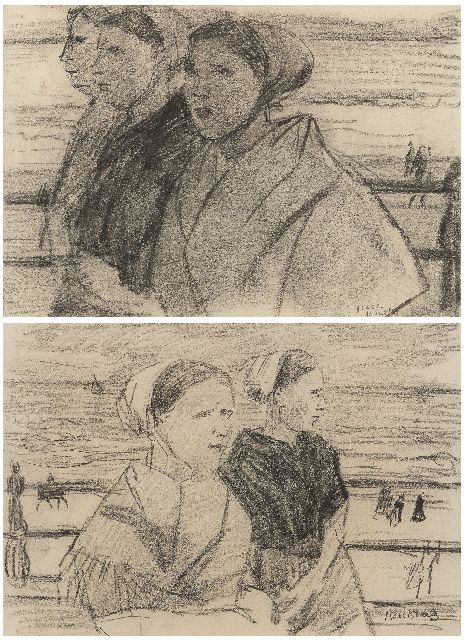 A day in the Oosterpark, Amsterdam 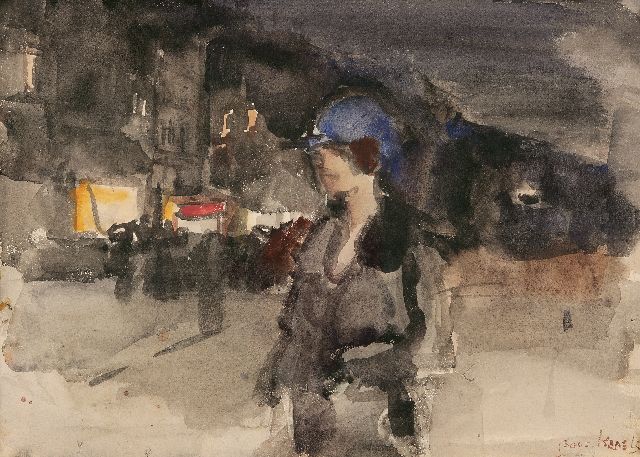 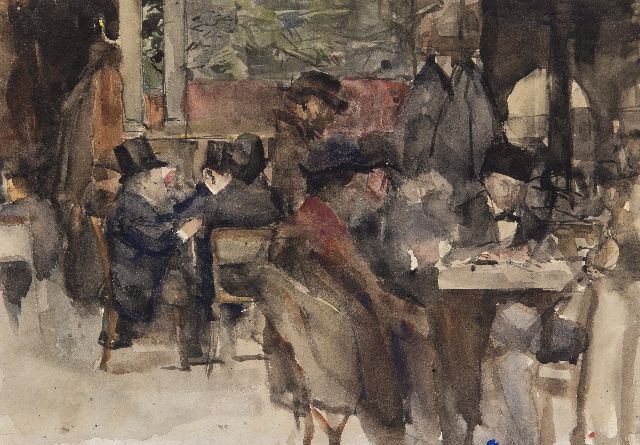 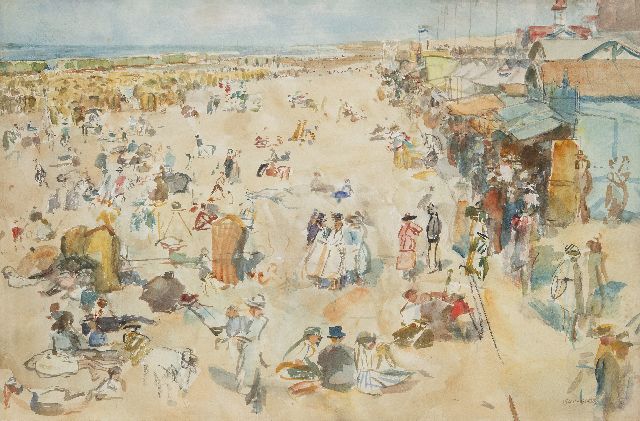 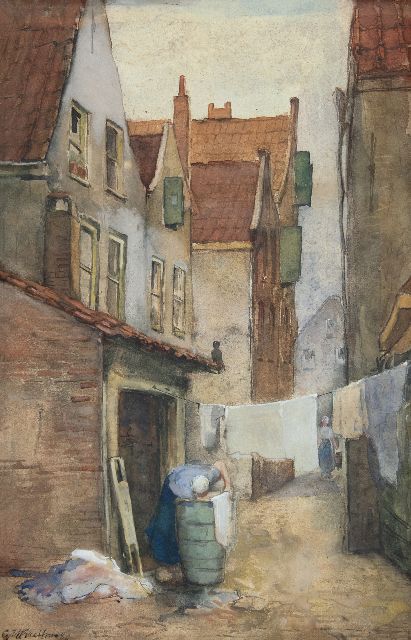 Alley in Rotterdam with laundress, 1880 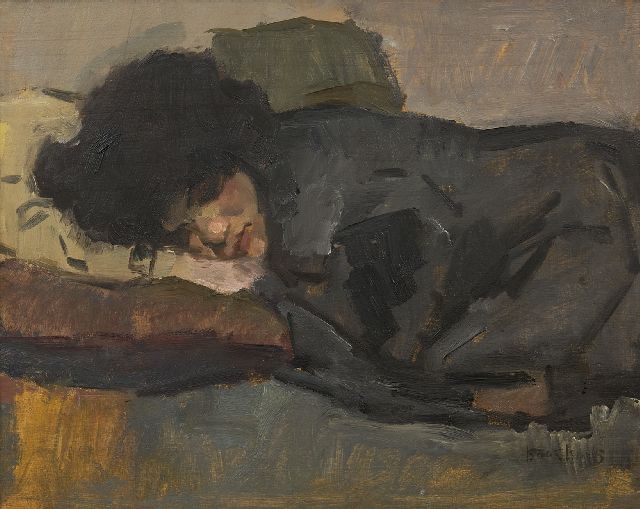 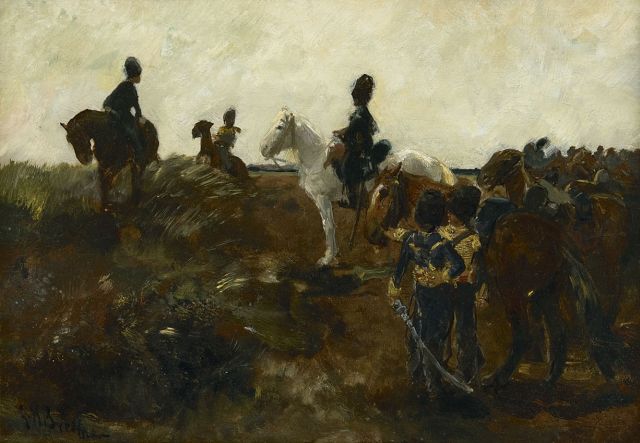 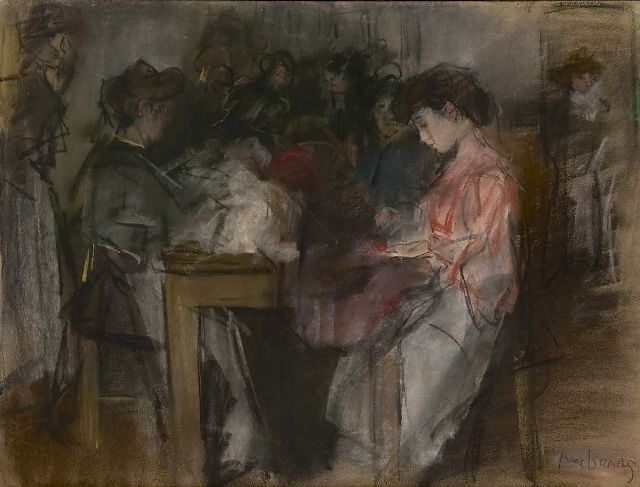 Seamstresses at the Atelier Paquin, Paris 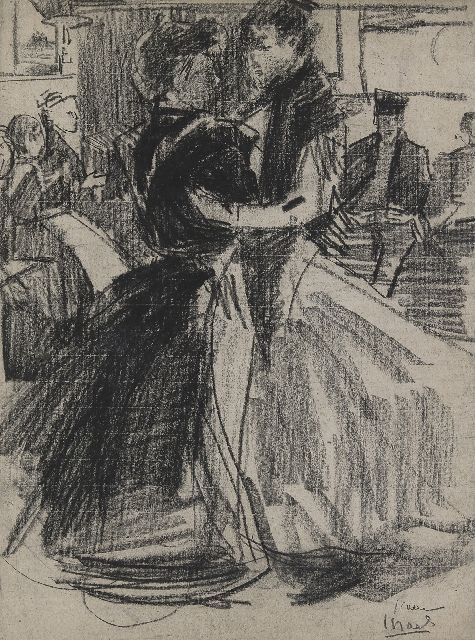 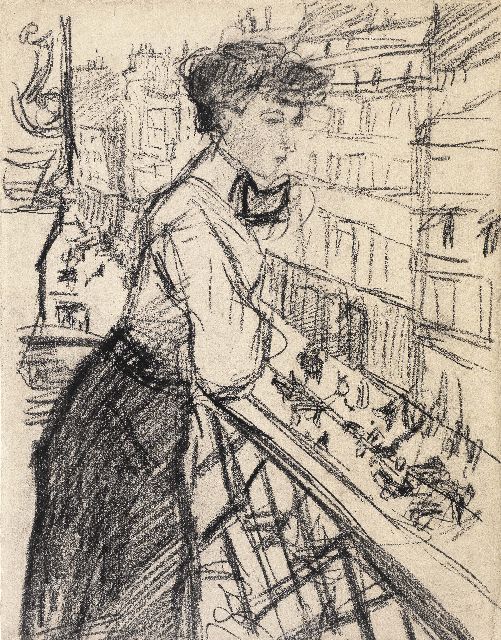 Lady on an balcony, Paris

12...5
12 months exchange right
lifelong authenticity guarantee
valuation report for insurance
restored in our own studio
art historic documentation
advice hanging and lighting
new or original frame
ready to hang
We and our partners use functional and analytical cookies for website optimization, statistics and personalized advertisements. By using our website or entering into an agreement, you indicate that you accept our privacy policy.
Read more I accept
Lees meer