Born in The Hague in 1837, Philip Sadée started drawing lessons at the age of ten. His teacher was Paul Tétar van Elven, former pupil of Jacobus van den Berg. Sadée was apprenticed to the latter from the age of fourteen to be trained as a history painter. Sadée also took classes at the Haagsche Teekenacademie. Once at work in his own studio, he started making history pieces and made a series of study trips with Karel Nakken and Jacob and Matthijs Maris, among others.

During his travels in Germany, Nakken became interested in simple folk life and in 1865 exhibited two genre pieces at the Exhibition of Living Masters in Amsterdam. Together with his friend Julius van de Sande Bakhuyzen, he traveled to Düsseldorf in the winter of that year to take lessons at the Düsseldorfer Malerschule, known for his training in the genre of painting. Once back in the Netherlands, Sadée, like Jozef Israëls and Blommers, discovered fishing life on the coast in Marken, Zandvoort and later Scheveningen. The fisherman genre, in which women occupies a large place, would become his main theme. In the months of September and October, Sadée was in Scheveningen to record the activity of the fishermen on the beach on the spot. Unlike other painters, who had a corner in their studio with fishing equipment, Sadée had his own home in Scheveningen.

'No blessing without diligence,' Sadée wrote on the first page of the sketchbook he started in 1869. A saying from the fisherman's life that suited the painter completely, diligently as he was. Sadée paid a lot of attention to the technical refinement of his paintings and to the looseness and natural movements of his figures. The writer Johan Gramm described Sadée's working method as follows: 'Some attitude, taken towards life, has struck the artist. […] Quickly and correctly, his drawing designs two three, four outlines to this position. Later, our meticulous artist weighs up the various studies and chooses from them the attitude that suits him best for his group. '

Sadée's work was much appreciated for its smooth, finished brushstroke. He also deviated from the more atmospheric mood art of the Haagse Scholers in his detailing and a brighter use of color. Usually he painted groups on the beach or in the dunes, with the sea in the background; the returning fishing fleet or the fish auction on the beach. This work often showed social commitment, in contrast to that of his contemporaries, who were more interested in the picturesque. In addition to his beloved theme of beach life, he also painted an inner house or a church interior and cityscapes of the cities he visited during one of his many travels; Maastricht, The Hague, Nijmegen, Haarlem, Frankfurt, cities along the Rhine where he and his friend Julius van de Sande Bakhuyzen passed by and Amsterdam. While traveling he was inspired by cemeteries and the activity at the stations. Not only the stations were depicted by him, but also industrial subjects; railway bridges, steamers, and trains. Sadée was an individualist who went his own way and did not like to come to the fore and because of his great knowledge of business - he traveled a lot and attended exhibitions at home and abroad - he was an authority in the field of modern art. He was greatly appreciated both nationally and internationally (Scotland, England and America). 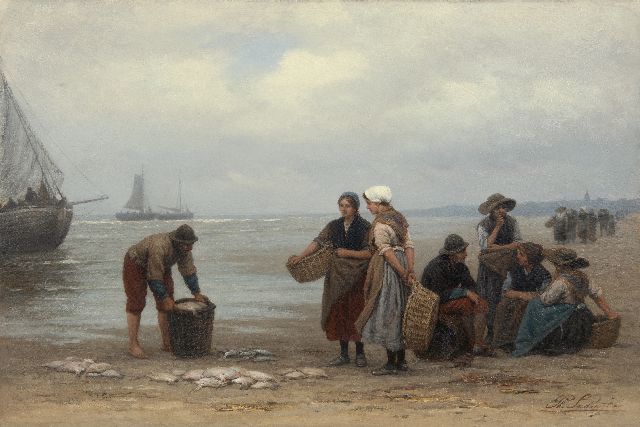 Selling fish on the beach of Scheveningen 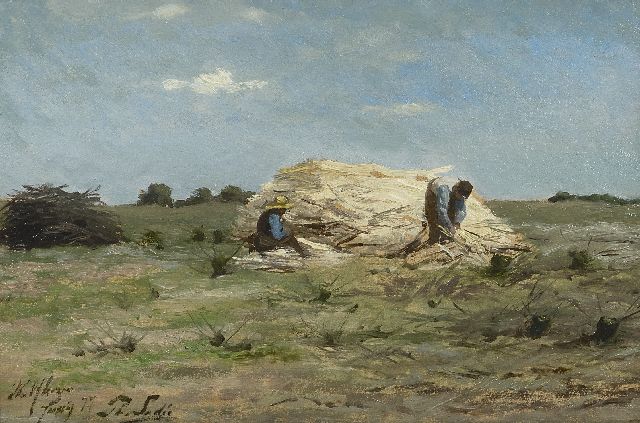 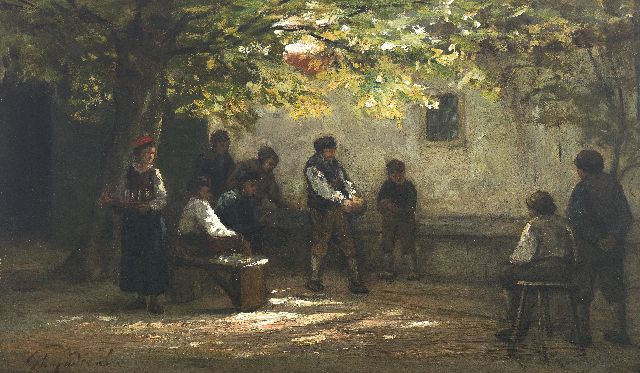 Bowling in the courtyard 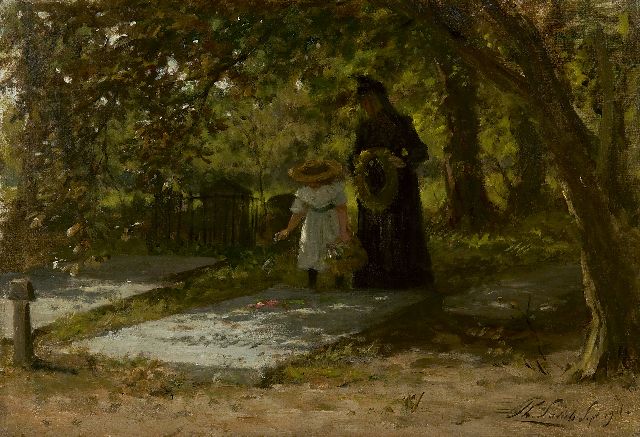 Visit to the graveyard 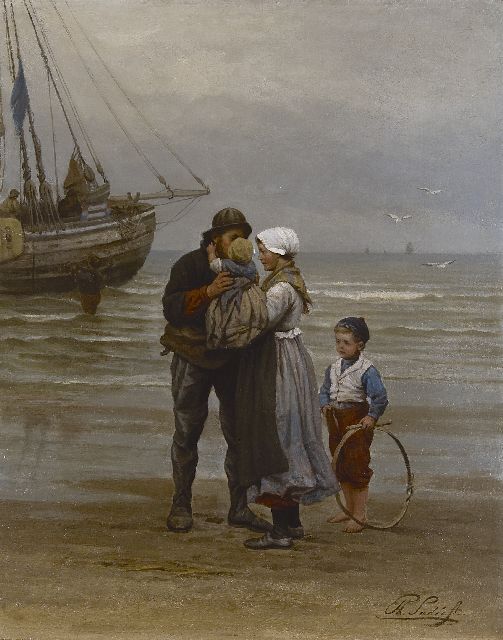 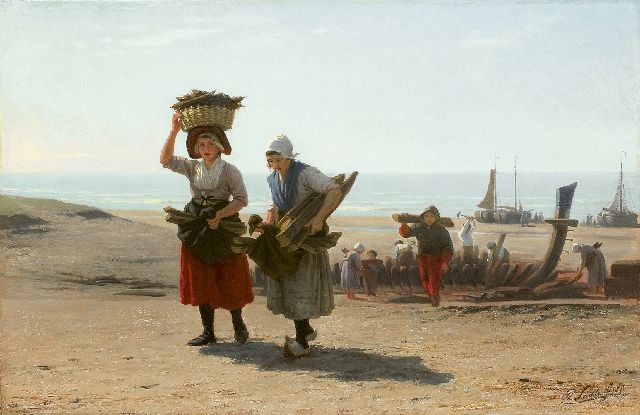 The dismantling of a ship 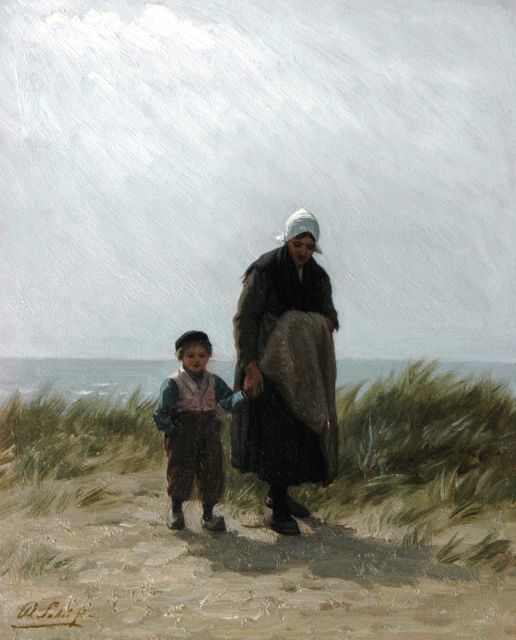 Mother with child in the dunes, Scheveningen 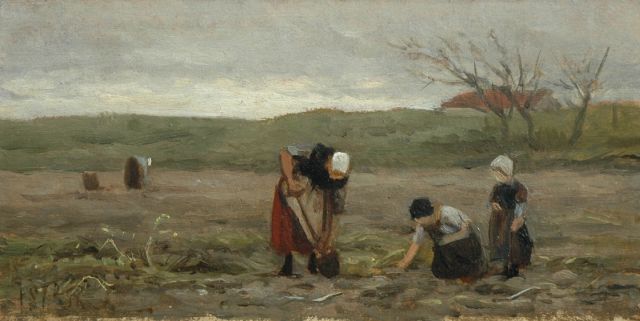 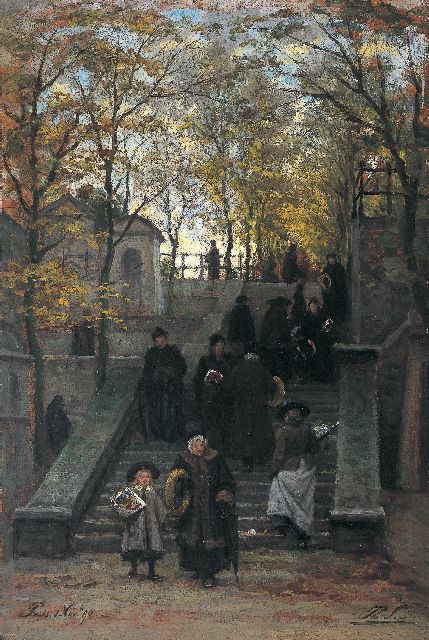 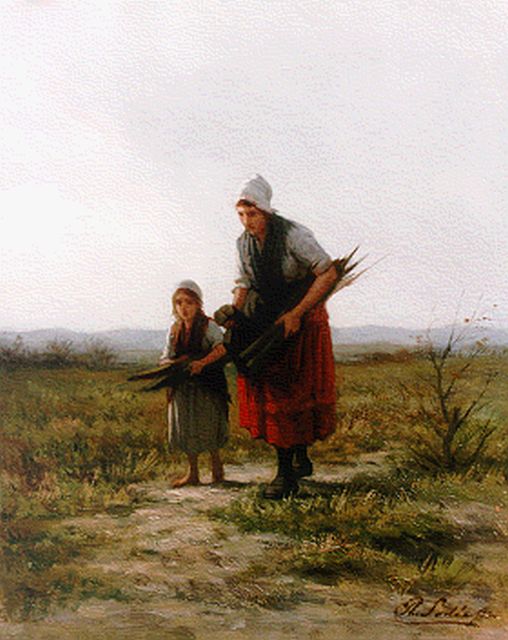 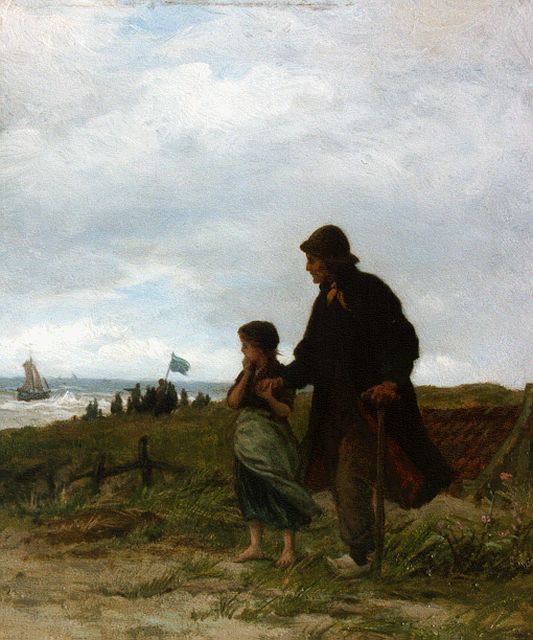 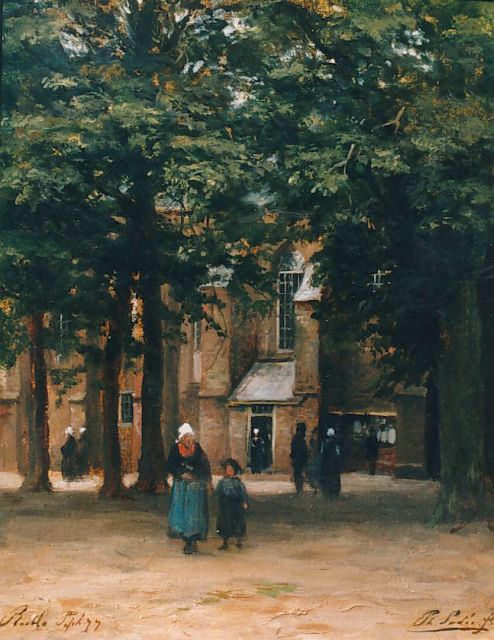 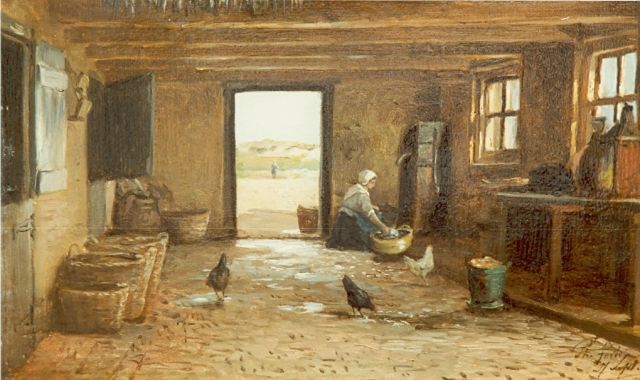 Planting of marram in the dunes 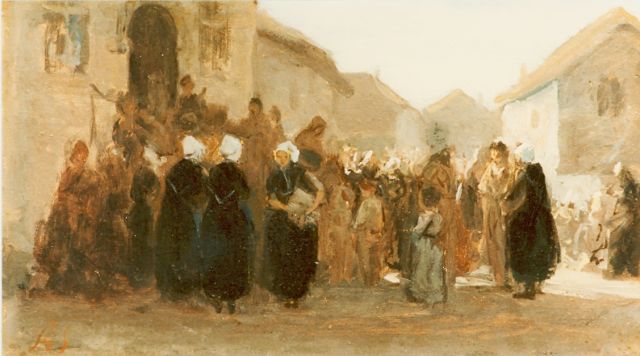 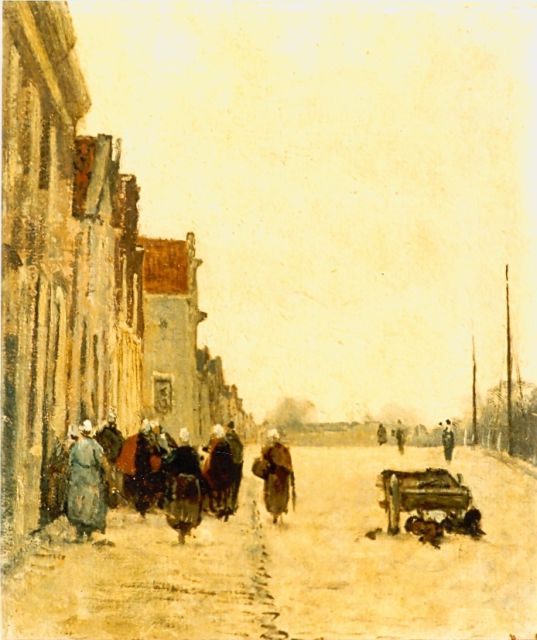 Women in a street 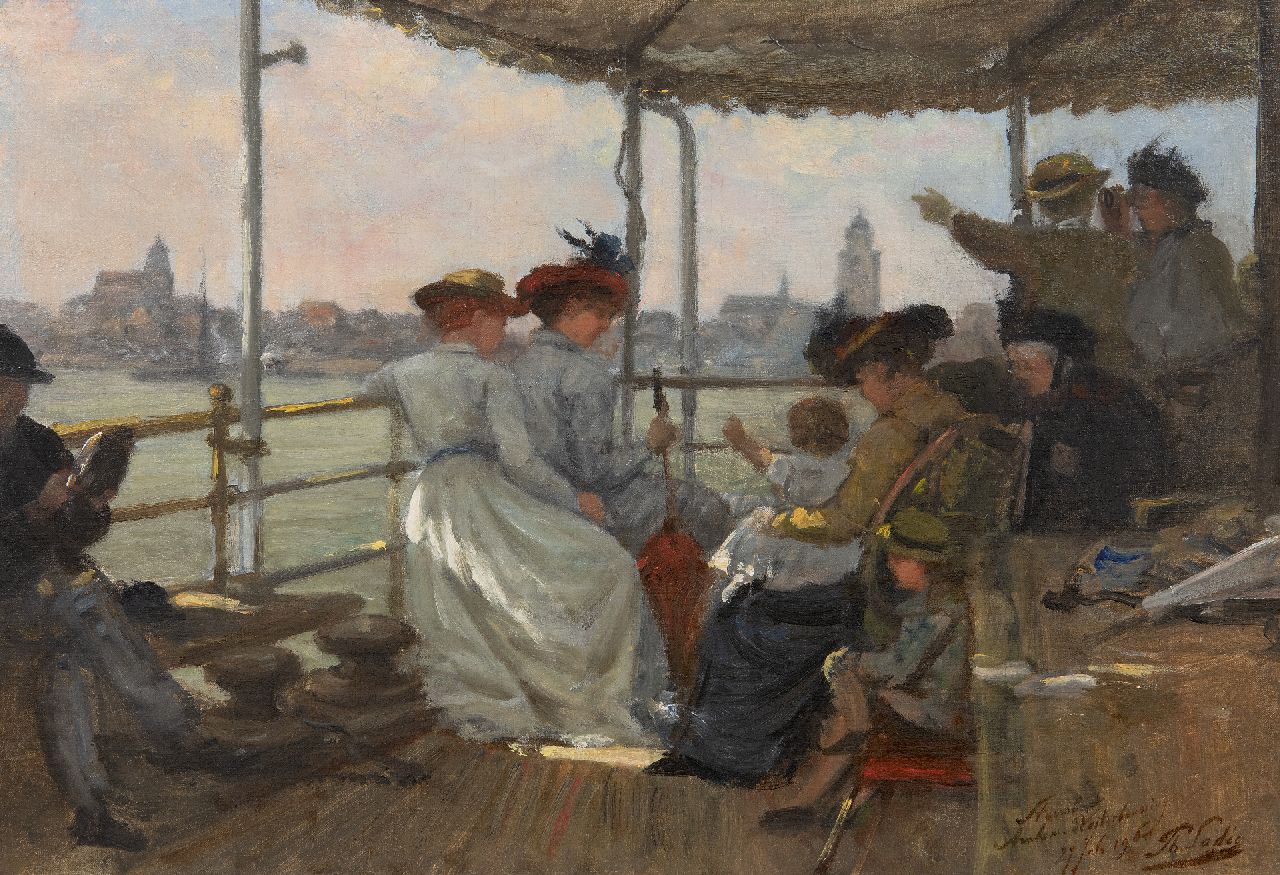 Daytrip on the steamship from Arnhem to the Westerbouwing, 1900