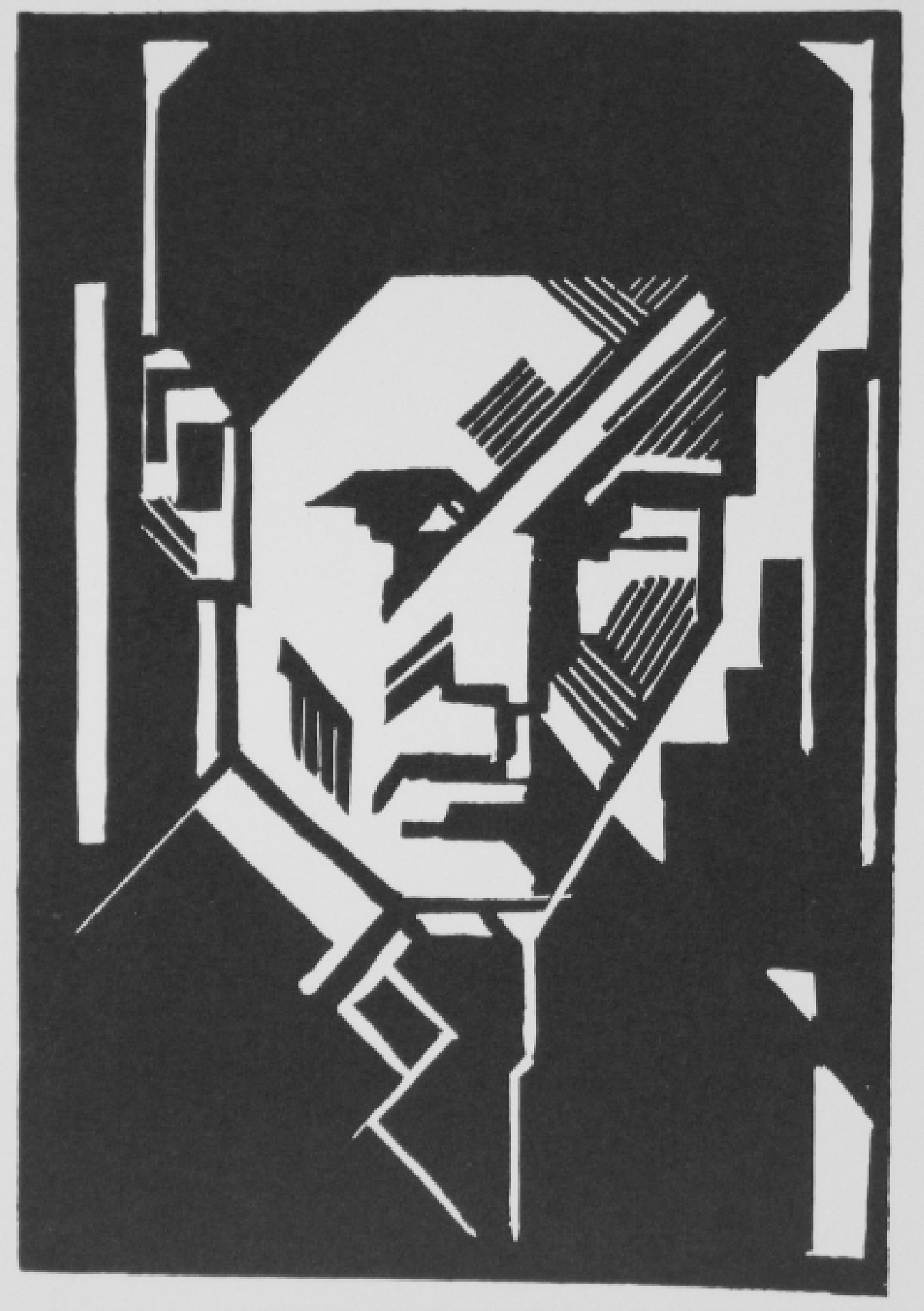 Wobbe Hendrik Alkema, painter, graphic artist, technical draftsman, architect and designer, moved with his family from the impoverished peat colonies to Groningen when he was thirteen. To brush up on the family's income, he was apprenticed to a furniture maker. He also took classes in technical drawing at the Evening Business School. In 1919 he enrolled at Minerva Academy and started in the Furniture Design department.

In 1922 Alkema became an aspirant member of De Ploeg and in 1924 he became a working member. This working membership would be short-lived. Alkema, a serious man, principally teetotaler and not exactly charmed by Groningen, had few kindred spirits within the association. In 1926, for example, he wrote in a letter to kindred spirit Carel Willink that he had the feeling that he was slowly but surely dying there, citing the always sad rain showers as well as the narrow and narrow mind of the people. Only once did he participate in a Ploeg exhibition. When he made another request to become a working member in 1926, this was rejected by the general meeting. Alkema was a bit of an outsider among the Plow Painters who usually captured their multicolored impressions of the Groningen land outside.

To meet like-minded avant-garde artists, Alkema traveled by bicycle to Antwerp and Drogenbos in Belgium. Through Jan Altink he had become acquainted with the Belgian magazine 'De Driehoek' and Belgian constructivism. The encounters in Belgium were decisive for the line that started in his work. A geometric-abstract style in which circle, rectangle and triangle became defining form elements. The local press found this difficult, even though Alkema's work was anything but cold and businesslike due to the warm use of color he used to enhance the emotional charge of his paintings.

Alkema's artist's life was characterized by varying periods in which he could practice his free painting. Forced by the economic recession, he had to give up his job as an architectural draftsman around 1932 and in the years that followed earned his living by designing furniture and lamps, drawing for a printing plant and small renovations, or as supervisor for restoration work. Between 1930 and 1940 Alkema traveled through Germany, where he returned very gloomy because of the hostile attitude of the state to modern art. This affected him so much that he destroyed part of his own art and only resumed his work as an artist after the war.

During the war years, in 1941, Alkema moved with his family to Assen, after being given daily management of the restoration of the Romanesque church in Anloo. In 1947 Alkema started to paint again and he became a member of the Ploeg for the second time in 1951, but soon after joined Het Narrenschip, the artist group founded by Ekke Kleima, Jan Jordens and Jan van der Zee. After moving back to Groningen in 1948, due to a lack of studio space, he mainly made linoleum cuts, drawings and gouaches. Only after moving to Kampen in 1958, where he was involved in the restoration of the Sint Nicolaaskerk, did he have a studio again and started painting again. The works that emerged from that time showed a wide variation in use of form and were less geometrically rectilinear: circles became ovals, straight lines were rounded.

Alkema only needed a geometric abstract idiom and looked for it in himself. He told his biographer Henk van Os that his compositions originated from his feeling, in which his whole being became involved. In the 'mathematically clear' he found his way to depict moods and emotions. Constructivism was an attitude to life for Alkema, the opportunity to get to the essence of things. 'We look inside, find our soul and are amazed,' he said. Nevertheless, his paintings were dismissed as 'cubes of fantasies or' cubic jokes. ' In contrast to his friend and studio colleague Jan van der Zee, who released his geometric form experiments after a few years, Alkema would continue to devote himself to abstraction.

Interest in his work grew under the influence of Jos W. de Gruijter, director of the Groninger Museum, where Alkema had his first exhibition in 1960. But he didn't sell much. It was difficult for him to part with it because it had become part of his life. His art, compositions that reflect the harmony that lies behind reality, is not for fast times, but invites you to rest and contemplation.
© Simonis & Buunk

previously for salepaintings by Wobbe Alkema 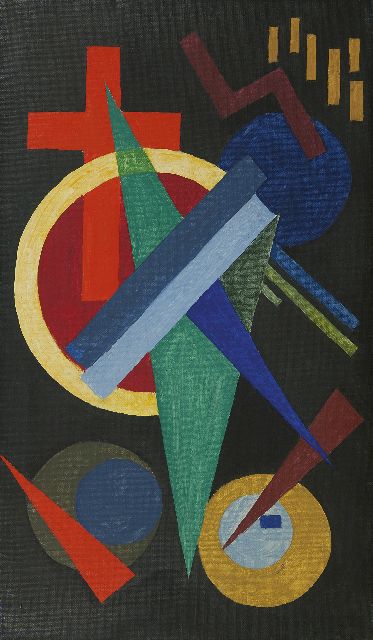 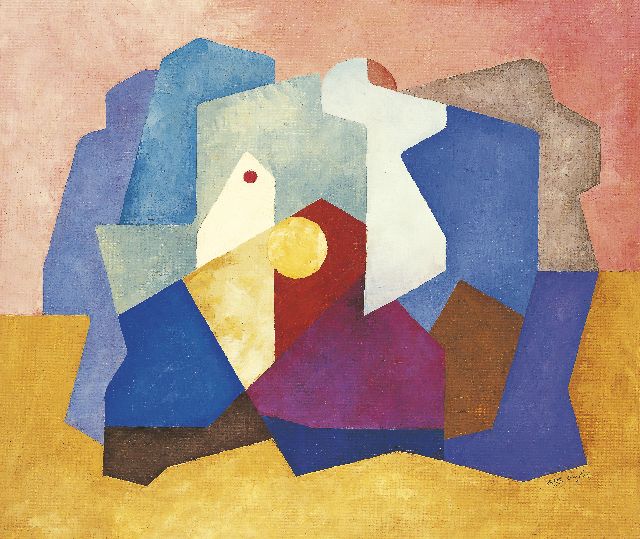 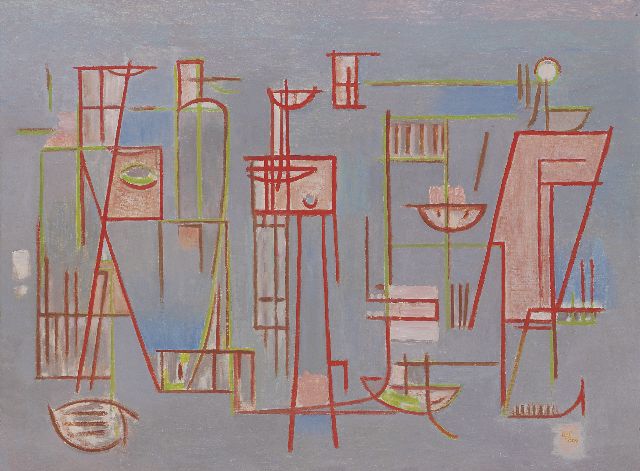 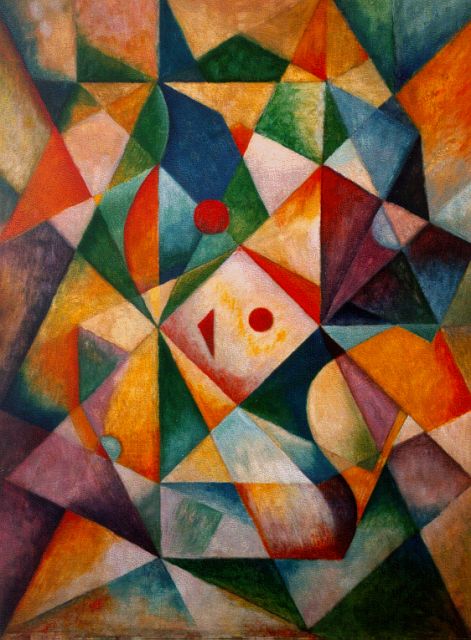