Jan Gerrit Jordens, born in Wageningen, ended up in Groningen after various wanderings. After obtaining the certificate Secondary Drawing at the Royal Academy of Art in The Hague and the National Normal School for Drawing Teachers in Amsterdam, where he undoubtedly built up an artistic network, in 1907 he accepted a job as a teacher of drawing at the Rijks HBS in Warffum, where he became director of the Evening Drawing School a year later. In 1916 he moved with his family to Groningen, where he first became an art teacher at the Rijks HBS, then at the Gemeentelijke HBS. Jordens would continue to work here until his retirement in 1948. At the time, he also enrolled at the Minerva art academy, where he also took painting lessons from F.H. Bach, one of the academy's most stimulating teachers. Jordens was the first art teacher to introduce free expression in his classes in the early 1920s after taking a course with Austrian drawing educators Franz Cizek and Richard Rothe. Jordens published regularly about his way of teaching, wrote manuals for linoleum cutting and thereby attracted international interest.

A few weeks after De Ploeg was founded in 1918, the unusual Jordens already registered as a member. With his contacts in the west and membership of the artists' associations St. Lucas and later The Independents in Amsterdam, he was undoubtedly seen as an asset by his fellow members. Despite his busy job, he was also very active within the association, as vice-chairman, chairman and secretary. In addition, he took care of the correspondence of the club. He would log out as a member several times in the period 1918-1945, which had to do with disagreements within the board, and then log in again to be able to judge a Ploeg exhibition. His wife Jet, also a member of De Ploeg, also signed in and out with her husband. In 1945 Jordens became a member for the last time and in 1950 finally joined the abstract expressionist-oriented art that erupted in the rest of the Netherlands. In that year he founded Het Narrenschip with Jan van der Zee, Ekke Kleima and Abe Kuipers. In 1960 he joined the artist group NU, which consisted largely of young artists. As one of the few Ploeg members, he remained in contact with artists outside the Groningen avant-garde throughout his artistic life.

Around 1915 Jordens painted in a late Impressionist style, from 1919 his paintings become temperamental and powerful in color. Maurits Werkman, poet, journalist and youngest brother of Hendrik Werkman, calls Jordens 'the representative of the very modern direction. Color, rhythm, surface filling is more important than reality. ' Jordens got his inspiration from expressionists from Mons such as Henri Le Fauconnier and Piet van Wijngaerdt. Portraits, landscapes and village views were created in warm blues and browns, reds and greens. At exhibitions, however, he mainly showed graphic work during these years. He was stimulated in the making of etchings and woodcuts by Jan Wiegers, just as Wiegers had happened under the influence of Kirchner in Switzerland.

Around 1933 - when most of the Plow Artists returned to more moderate Impressionism and Expressionism - Jorden's interest in Cubism began. He did it in his own way. Objects were not decomposed into basic geometric shapes, but he shuffled with everyday image elements that were arranged emotionally. He composed shapes and surfaces. This cubist work was alternated with nature-painted, expressive representations in dark colors, dominated by brown and purple. After the Second World War, the urge continued to renew itself and he continued to experiment with various materials and techniques. After his retirement in 1948, when Jordens was able to devote himself entirely to his artistry, he was granted the free expression that he had put at the center of his education. A special series of lyrical abstract watercolors of trees and landscapes that was created on Schiermonnikoog are testimony to this.

The constantly innovative Jordens took part in many exhibitions, including in the Amsterdam Stedelijk Museum, during the years that he still lived in Warffum and in 1956 a solo exhibition. He exhibited graphics in Paris and in 1958 the Groninger Museum organized a duo exhibition of his work and that of Jan van der Zee. On that occasion Jos W. de Gruyter characterized him as 'a painting musician, who always plays improvisations'.

previously for salepaintings, watercolours and drawings by Jan Jordens 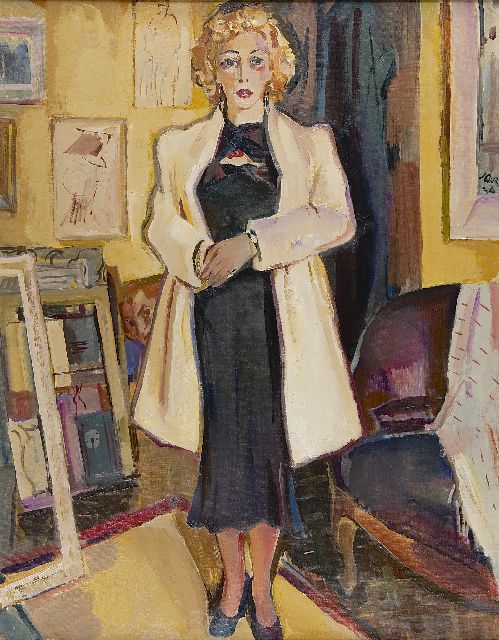 Lady in a painter's interior 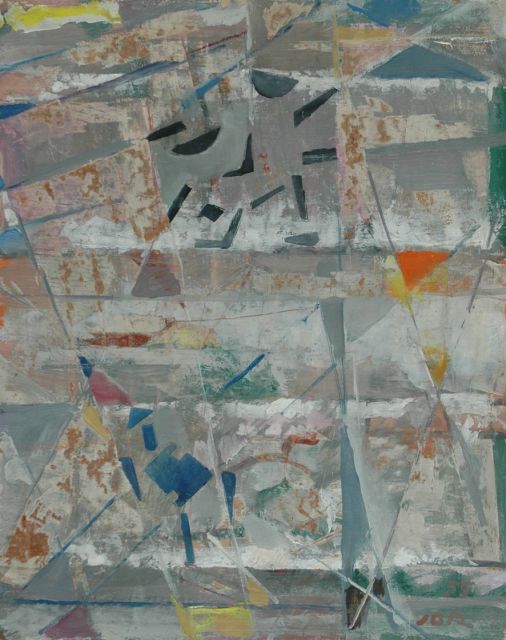 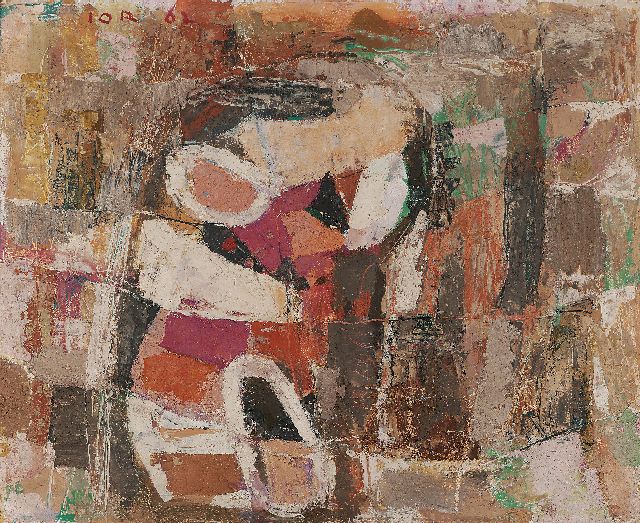 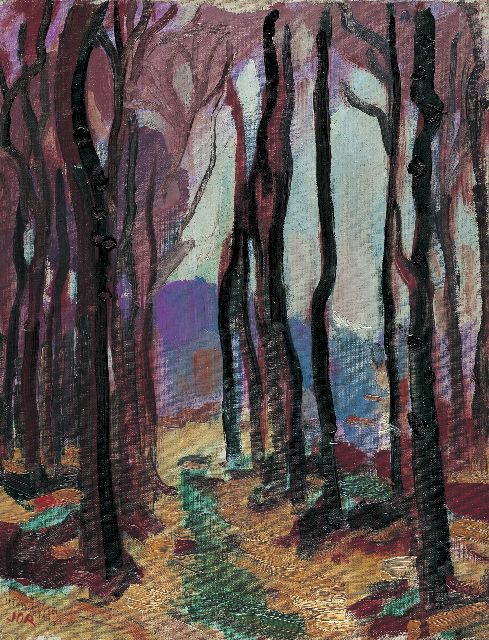 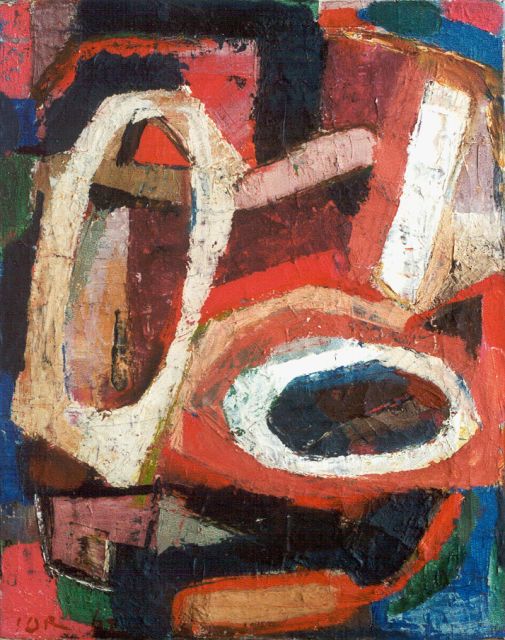 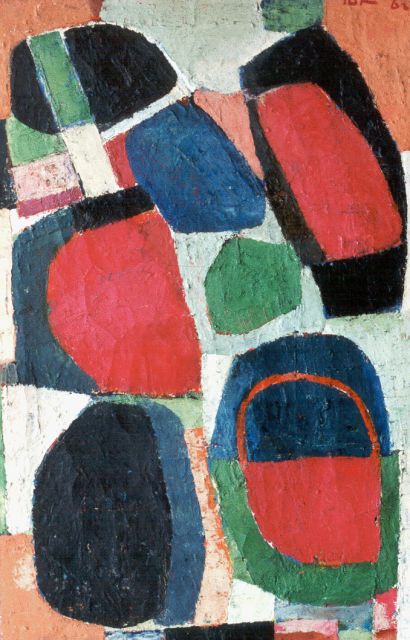 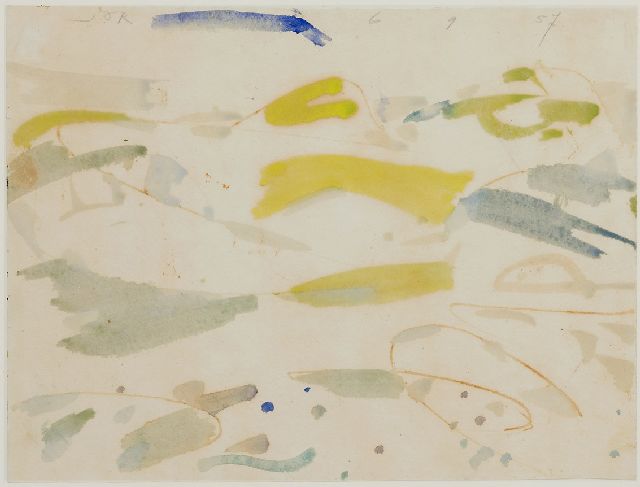 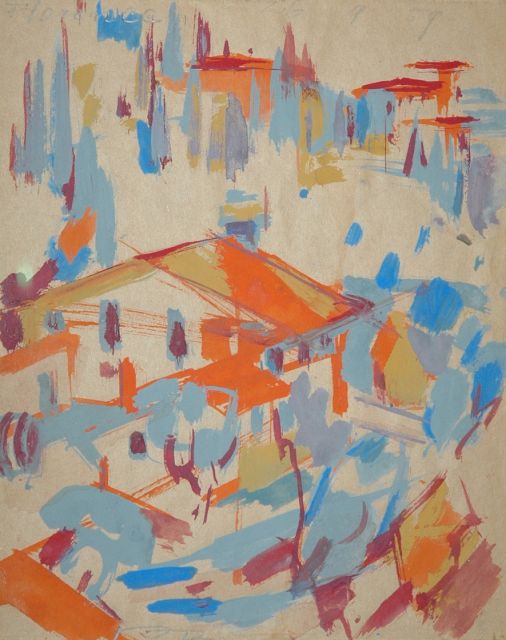 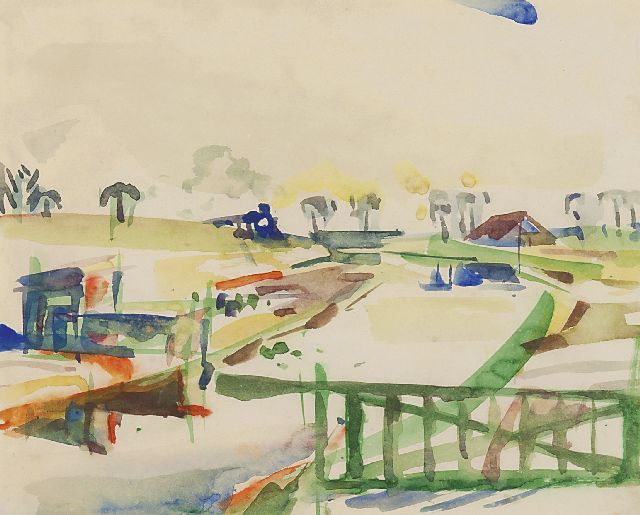 Landscape with a farm 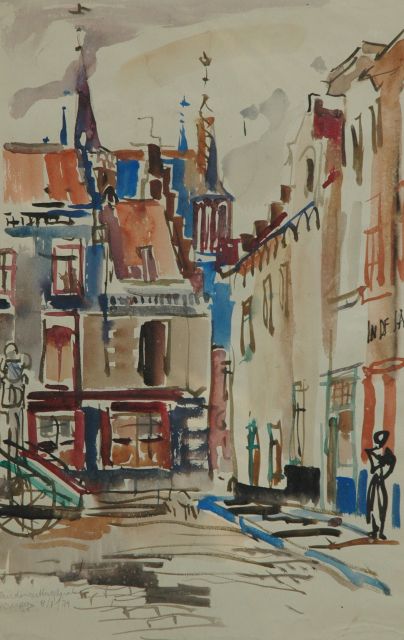 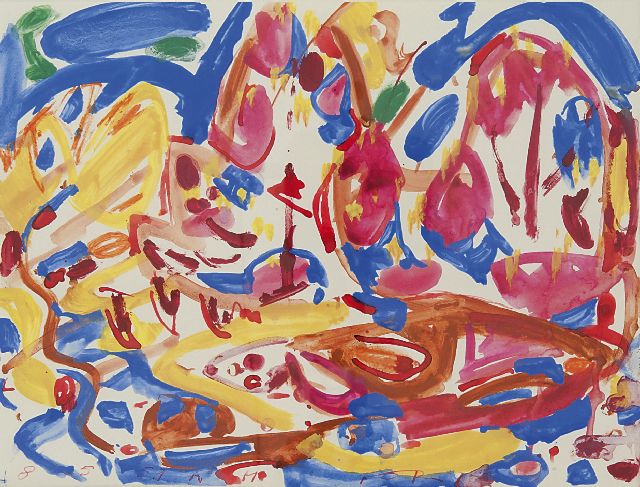 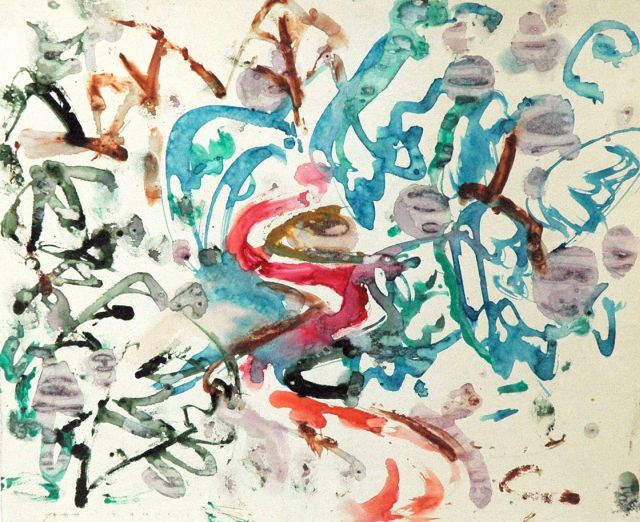 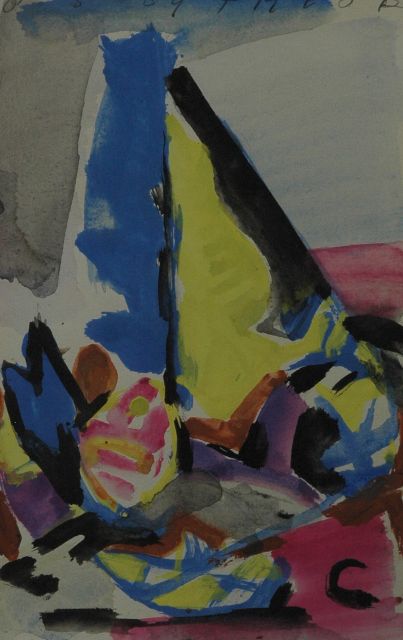 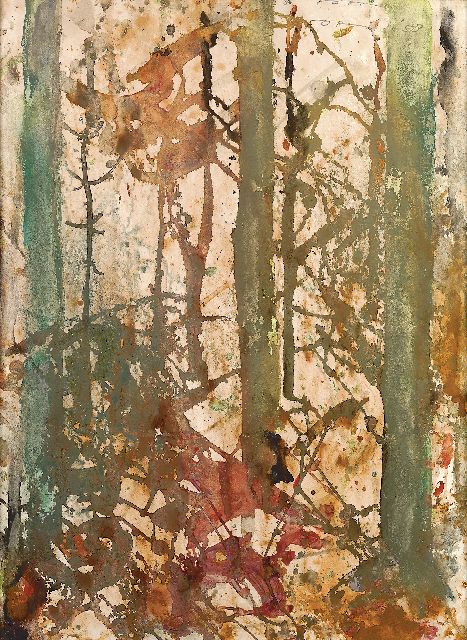 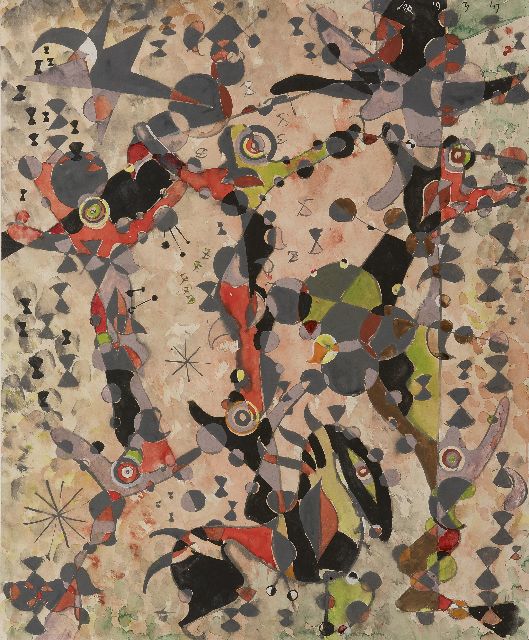 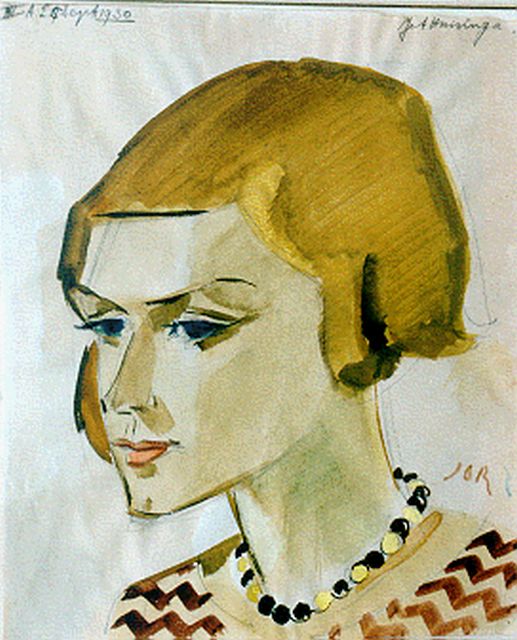 A portrait of Jet Huisinga 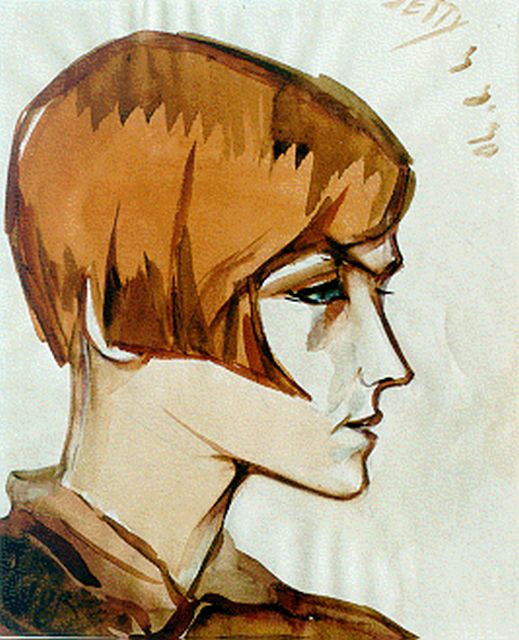 A portrait of Jenny 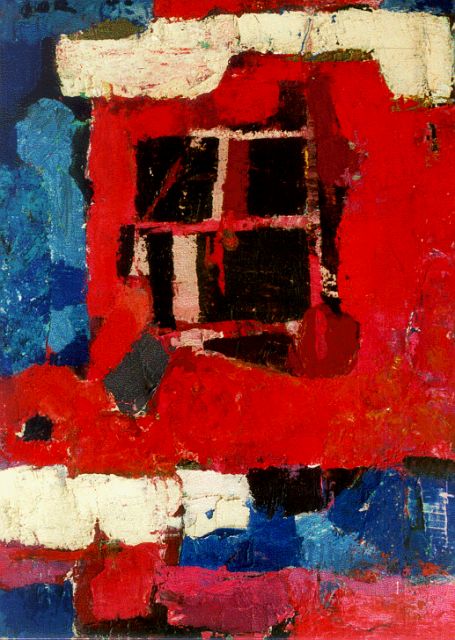 for salepaintings, watercolours and drawings by Jan Jordens 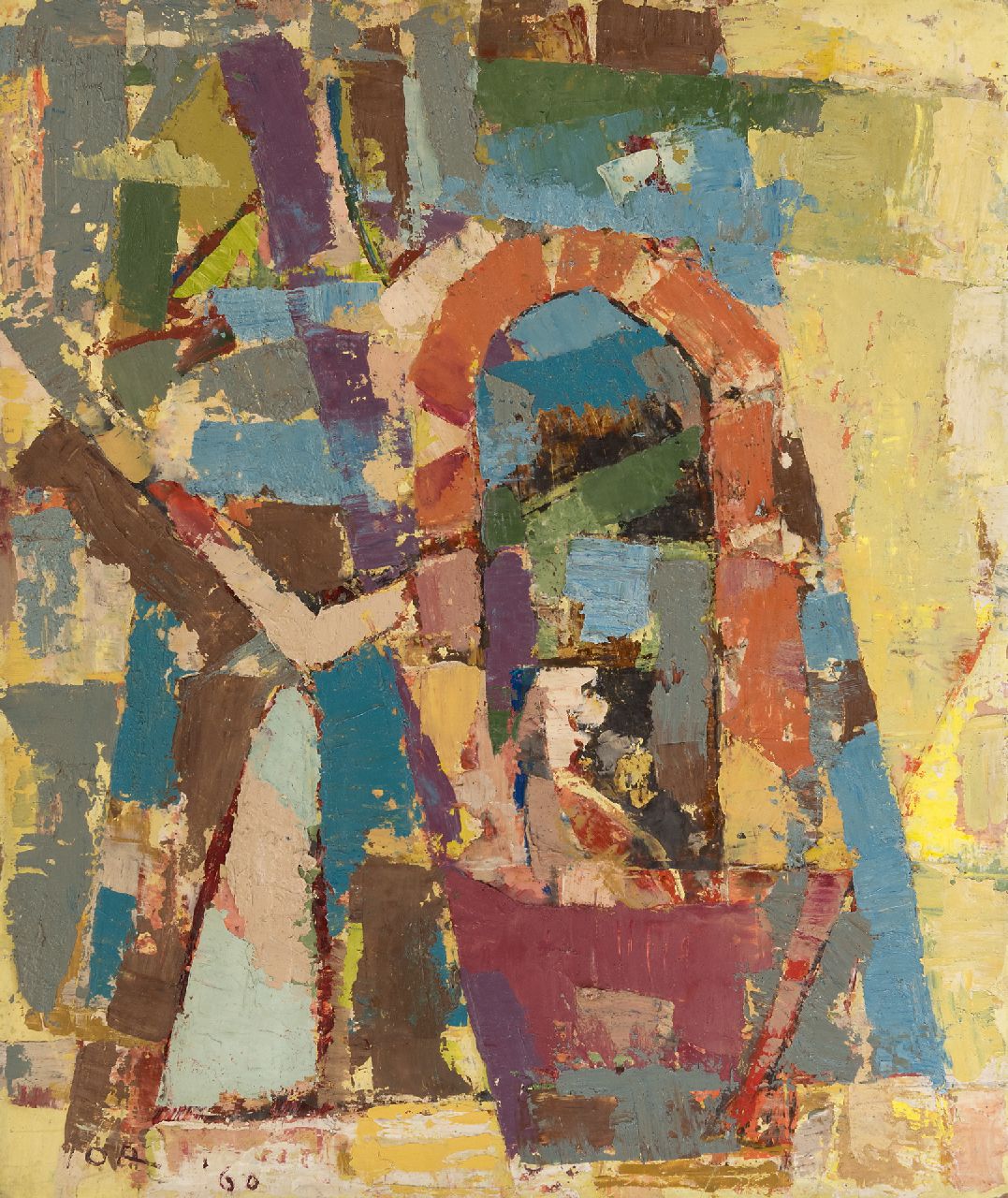